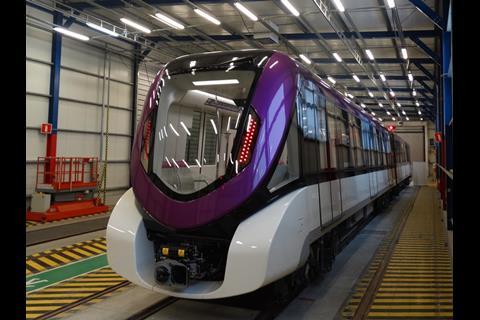 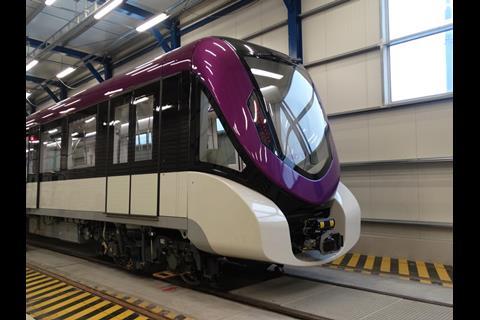 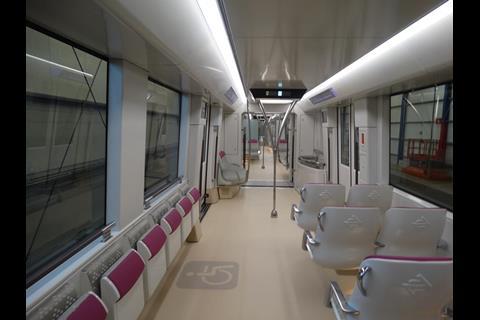 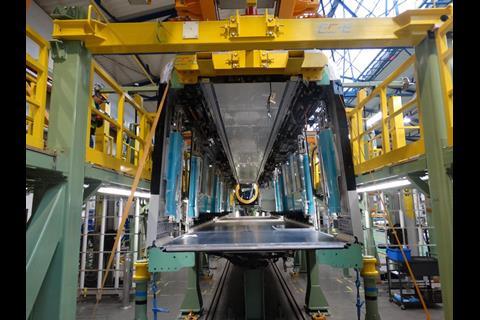 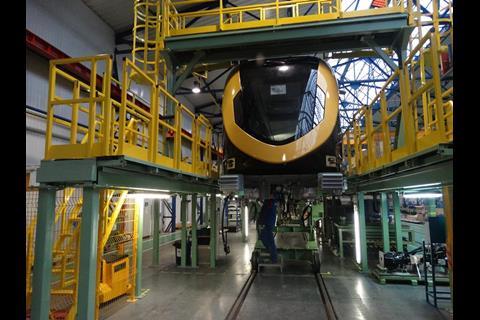 SAUDI ARABIA: Alstom unveiled a Metropolis trainset for the Riyadh metro at its Katowice factory in Poland on February 7. The Metropolis trainset destined for Line 6 is the fifth that Alstom has produced for Riyadh; the first left the factory on January 10. Deliveries are due to be completed in 2018.

The trains are 36 m long and 2 710 mm wide. The external and internal livery will match the colours of the lines: yellow for Line 4, green for Line 5 and purple for Line 6. This is intended to make the metro easier to use for residents who are not used to this mode of transport.

There are three classes of accommodation. First class features transverse seating; family class has transverse, longitudinal and tip-up seats; single class has longitudinal and tip-up seats. All three classes have wheelchair spaces. Trains for lines 5 and 6 have capacity for 231 passengers including 69 seated, whereas those for Line 4, which will serve King Khaled International Airport, have capacity for 228 passengers including 57 seated. The seat moquette design is inspired by traditional Arabian architecture and the handrails are shaped like palm trees.

Adaptations for the local desert climate include air-conditioning and door seals to prevent sand ingress. All axles are powered, giving a maximum speed of 90 km/h and ability to climb gradients of up to 6%. They will draw power at 750 V DC from a third rail. Lines 4 and 6 will share a depot.

Several Alstom sites in France are involved in the manufacture of the trainsets. Bogies are coming from Le Creusot, control systems from Villeurbanne, traction motors from Ornans and onboard signalling equipment from Saint-Ouen. Traction subsystems and auxiliary converters are being supplied from Charleroi in Belgium, with passenger information and security systems from Madrid in Spain. The aluminium car bodies are being made in Katowice, where final assembly is taking place.

The Katowice facility has four tracks for static testing, in addition to a 1·5 km test track. These are equipped with 750 V and 1·5 kV DC overhead wires that allows testing at up to 50 km/h with a temporary pantograph fitted to the metro trains. A planned upgrade would add 3 kV DC and 25 kV 50 Hz AC power supplies. Alstom is also planning to extend the test track.

Work on the six-line Riyadh metro network is 47% complete, with opening planned in 2019. Rolling stock is coming from three suppliers, which are building trains to a unified design.

Siemens is supplying 45 four-car trainsets for Line 1 and 29 two-car sets for Line 2 from its Inspiro family. The first was unveiled at its Simmering plant in Wien in February 2016. Bombardier Transportation is supplying 47 two-car Innovia sets that will operate on Line 3. The first was delivered to Riyadh in November, having undergone testing at the Kingston site in Canada. The vehicles are being assembled at its Sahagún plant in Mexico.