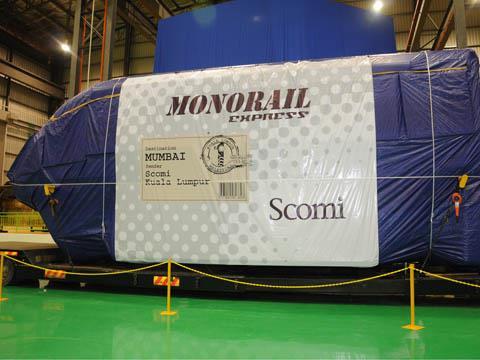 INDIA: The first vehicle for the Mumbai Monorail left Scomi Engineering's Kuala Lumpur factory for India on January 2. 'The first monorail car will play a pivotal role in the preliminary systems interface testing, which is critical in ensuring that the monorail system runs smoothly', said Suhaimi Yaacob, Country President of Scomi India.

Scomi is supplying 15 four-car trainsets as part of a consortium with Larsen & Toubro, which was awarded the Rs24·6bn turnkey contract for the 19·5 km straddle monorail in November 2008. Opening of the first 11 km between Jacob Circle and Wadala is planned for mid-2011, followed by a second phase taking the line to Chembur.

The Malaysian firm was previously responsible for the Kuala Lumpur monorail. It has invested US$11·8m in upgrading its manufacturing plant located to the north of the city, which has a 1 km test track and the capacity to produce a monorail car body every five to seven days.

The company also hopes to expand into the heavy rail and gas-fuelled bus markets.