BELGIUM: The electrification of the cross-border link between Montzen and Aachen West was formally inaugurated on December 12. Dr Harry Hondius reports. 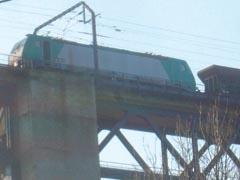 A veritable explosion of confetti bombs burst high in the air, showering the spectators as the inaugural train made its way eastwards over Montzen viaduct with an electric loco on the front. Celebrations on December 12 were held to mark the completion of electrification work on the final cross-border section of the main rail freight corridor linking Antwerpen and Zeebrugge with Germany via Tongeren and Visé, ready for the start of regular electric working with the European timetable change two days later.

The event was centred around the 1 100 m long viaduct, which takes the line over the Geul valley in eastern Belgium towards the border with Germany. It is one of the highlights of the 44·5 km Tongeren - Aachen West line built in 1915-17 under the supervision of the German army, and a masterpiece of railway infrastructure design. Today the route acts as Belgium’s main east-west freight corridor, parallelling the main line between Liège and Aachen used by international passenger services.

The Belgian end of the route was electrified at 3 kV DC in 1981 as far as the large Montzen marshalling yard. The 2·5%-graded 12 km climb on the German side from Aachen West to the Botzelaar tunnel had already been wired at 15 kV 16·7 Hz. In March 2006 Infrabel, DB Netz AG and DB Energie AG agreed to electrify the remaining 8 km at a total cost of €7·5m, of which 80% was for the Belgian section and 20% in Germany.

Another €3m was spent on modifications at Montzen yard. Further work is planned here, as the signalling control centre at Monzten will be moved to either Liège or Verviers under Infrabel’s strategy to reduce the number of signalboxes on its network from 269 to 31 by the end of 2012.

The missing link has been wired using both voltages; the changeover between the two systems takes place at a 160 m isolated section in the middle of the viaduct. Completion of the electrification is expected to cut typical transit times for freight trains by up to 1 h on the 174 km corridor between Antwerpen and Aachen. The 40 multi-system Traxx locos of Class 28, which B-Cargo has leased from Angel Trains International for 10 years, will be able to pull longer trains at higher speeds without any need for a locomotive change to reach many German destinations.

The route is currently being used by 35 000 trains a year — around 110 per day. Of these, 40% are moving to or from the ports of Antwerpen and Zeebrugge and another 7% serve industries in the Antwerpen region. The border crossings at Montzen, Hamont and Visé (to the Netherlands and Germany) today account for 37% of international freight traffic using the Infrabel network, compared to 23% for the Luxembourg connections at Athus and Sterpenich, 27% for the routes to France through Quévy, Erquelinnes and Mouscron, or 13% to the Netherlands via Roosendaal and Zelzaete.

With rail’s share of Antwerpen container traffic forecast to grow from 9% today to 15% in 2030, and its share of Zeebrugge traffic rising from 37% to 48%, Infrabel is expecting the number of trains running via Montzen to double by 2030.

During 2007, Infrabel reports that 97 million net tonnes of freight used its tracks, of which B-Cargo alone accounted for 59·7 million tonnes. Open access operators are taking a growing share of the market, with Cross Rail, Rail4chem, TransporT, ERS Railways, SNCF Fret, ACTS and CFL Cargo now all certified to use the Belgian network. The first four of these already operate over the Montzen line, and the last two are expected to follow suit before long.

With DB’s yard at Aachen West already heavily overloaded, discussions have started between Infrabel and DB Netz to see whether Montzen could be used as a relief. At present only 25% of the traffic through Montzen goes north towards Rheydt; the remainder has to reverse at Aachen West to head east through Aachen Hbf to the heavily-loaded line to Düren. Several of the private operators have expressed interest in buying or leasing tracks at Montzen to stable or re-crew their trains, so that they can run through Aachen West without stopping.

However, the completion of electrification on the Montzen line raises further questions over the future of the controversial Iron Rhine corridor between Hamont, Weert, Roermond, Dalheim and Rheydt, which after a lengthy saga of proposals and counter-proposals could finally be reopened throughout in 2018. The latest conference between the Belgian, Dutch and German transport ministers on November 16 rejected a Dutch suggestion for a new line parallel to the A52 motorway and concluded that a new single-track tunnel should be built under the Meinweg nature reserve at Roermond. This would allow the line to carry up 72 trains a day. But the drawn-out drama over the Iron Rhine offers a clear warning to others: never stop using a railway line unless you are absolutely sure you will never need it again.

CAPTION: The confetti bombs explode as the opening train heads east to inaugurate the electrification. Seen passing under the isolated section at Montzen viaduct, the train is headed by a Traxx multi-system locomotive, but was actually pushed out of the yard by an SNCB Class 62 diesel, and the pantograph was only raised when it reached the 15 kV wires.