USA: A hydrogen-powered shunting locomotive now being assembled will serve as a testbed for reducing diesel fuel use by North America’s railroads. David Lustig reports from Topeka. 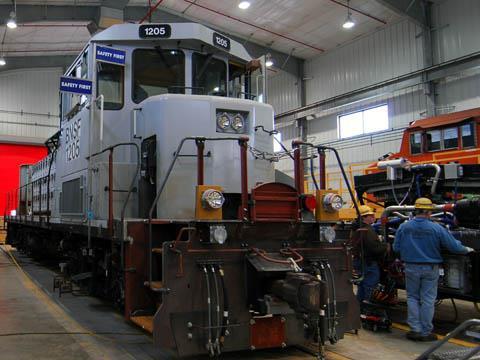 Taking shape in the BNSF Railway workshop at Topeka, Kansas, is an experimental shunting locomotive powered by hydrogen fuel cells. BNSF believes that fuel cell technology offers the potential to reduce air pollution as well as preparing the way for a future locomotive fleet that is not dependent on oil.

‘While it’s not a proven technology and the project is still in its infancy, we believe investments like the fuel cell switching locomotive are important for the advancement of new technology’, explains Craig Hill, BNSF’s Vice-President of Mechanical & Value Engineering.

BNSF estimates its diesel locomotive fleet burns more than 15 million litres a day, about 2% of all US diesel fuel usage. In its third-quarter results for 2008, the railroad said diesel fuel represented 26% of its operating costs. This was more than $500m higher than the equivalent quarter in 2007 for a comparable level of consumption.

The use of fuel cells in road vehicles such as buses and cars is not new, but to date there have only been a few attempts to introduce the introduce the technology to the rail sector. An experimental fuel-cell railcar is being tested in Japan, and another is expected to start test running in Denmark in 2010 (RG 1.08 p30). BNSF’s project was officially launched in January 2008, and is the first to be undertaken by a Class I railroad in North America.

The railway is working with Vehicle Projects LLC, a private engineering company based in Denver which has been developing and demonstrating prototype fuel cell vehicles for various modes. Since 2003 the company has also been working on a project sponsored by the US Department of Defense to develop a 1·2 MW fuel cell locomotive. The two companies insist that the latest prototype, which is being assembled by BNSF’s mechanical department using a former Railpower Green Goat hybrid as the platform, is strictly a testbed.

In simple terms, a fuel cell is an electrochemical device that combines hydrogen and oxygen to generate electricity, producing water and heat as a by-product. As long as fuel is available, the fuel cell continues to generate power. Oxygen is available from the air, but the hydrogen must be supplied. BNSF envisages that the hydrogen will be generated off the vehicle using electricity, which can be drawn from a number of available sources including nuclear, wind or solar.

The experimental locomotive will carry compressed hydrogen on board in tanks similar to those used on fuel-cell road vehicles. Since the fuel cells use an electro-chemical process rather than conventional combustion, it is clean (meaning no environmentally-harmful emissions), quiet and is expected to be two to three times more fuel-efficient than a standard US diesel locomotive.

According to BNSF, the electricity generated by the onboard fuel cell power module will be stored in batteries or fed directly to the locomotive’s high-voltage propulsion system. DC choppers will be used to control the power to each traction motor independently, providing substantially improved adhesion compared to a conventional locomotive wheel-slip system. BNSF says the locomtoive will be rated at 2 000 hp for traction.

The Railpower locomotive, which had been reduced to a shell, was delivered from Montréal to Topeka in 2007, and the various components, including the fuel cell power modules and the hydrogen storage tanks are now being installed, along with the electrical transmission and control systems. BNSF and Vehicle Products had hoped to begin testing the completed unit in 2008, but are now expecting to start operations during 2009. The loco is also expected to visit the Transportation Technology Center at Pueblo for testing by the Federal Railroad Administration.

According to the President of Vehicle Projects, Arnold Miller, ‘the world burns millions of barrels of oil for energy, and the waste carbon is then emitted to the atmosphere. Because they don’t rely on oil as a fuel source, fuel cells solve these two issues’. He believes that developing proof-of-concept locomotives is an important first step toward the use of fuel cells in future rail applications.