Fugger Express is ready to roll

GERMANY: A party last month marked the arrival of the first EMUs to operate quasi-S-Bahn services radiating from Augsburg. 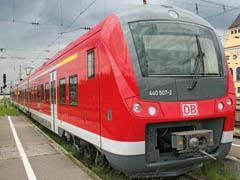 On August 8 DB’s regular ICE services from München to Stuttgart and Nürnberg were diverted away from Platform 1 at Augsburg Hbf to make way for public celebrations. A giant party was held to commemorate the forthcoming launch of the Fugger Express. The timetable change on December 14 will see the start of operations on what is being described as Bayern’s third S-Bahn network.

In fact, Augsburg is not really big enough to merit a full S-Bahn, and the new services will not meet all of DB’s criteria, so they are officially being described as 'S-Bahn-like transport’. The network is being promoted as the Fugger-Netz after local celebrities — the Fugger banking and trading family was active in Augsburg during the 15th and 16th centuries.

Centrepiece of the celebrations was the first of 37 new Class ET440 Coradia Lirex EMUs being built for DB Regio Bayerisch-Schwaben by Alstom LHB at Salzgitter. The first unit had been formally welcomed to Augsburg on July 18 by the city’s Mayor Dr Kurt Gribl and a choir of local schoolchildren singing a specially-composed 'Fugger Express Song’.

Within the Augsburger Verkehrsverbund area, Fugger Express services will radiate out from the city as far as Mammendorf on the main line towards München, Otting-Weilheim on the line to Donauwörth and Nürnberg, and Dinkelscherben on the route towards Ulm and Stuttgart. All these routes are already electrified. In practice, the trains will continue beyond the AVV boundary to München and Ulm, and later beyond Donauwörth to Aalen in Württemburg.

With 79 ET 440 trainsets on order, some of the later builds are also destined to operate in Bayern. From the December 2009 timetable, they will take over the services between München and Passau via Landshut and Plattling as well as routes from Würzburg to Nürnberg, Bamberg, Treuchtlingen and Lohr-am-Main plus the branches from Gemünden to Jossa and Schlüchtern in Hessen.