ROBEL: Driven by a robust export market and sub-contracted work from its parent company Plasser & Theurer, German track equipment supplier Robel is increasing capacity at its base in the south of the country. 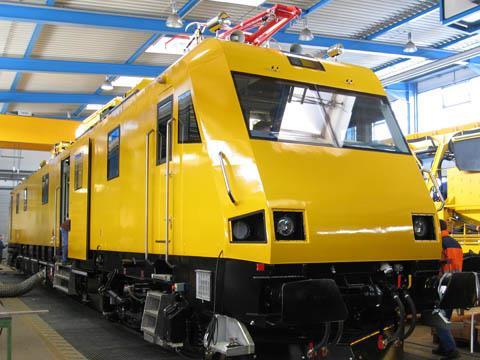 Like its partner company Plasser & Theurer, German supplier Robel is in the happy position of enjoying a full order book, much of which is destined for the export market. So busy is the company that it is about to double its production capacity, having previously expanded its factory to raise capacity in 2003-04.

Currently in the assembly shops at Freilassing are the first two of eight Type 57.44 self-propelled overhead line maintenance and inspection vehicles. The first was due to undergo a three-month programme of acceptance trials from March, and the second was due to be sent to Münster for display at iaf 2009. The customer is a large national operator in Europe with an extensive electrified network.

The 57.44 is a four-axle vehicle with two cabs and the ability to run at 140 km/h thanks to two 480 kW diesel engines driving through hydrodynamic transmissions; hydrostatic transmission is used when the machine is in work mode. During braking, the 24·9 m long vehicle makes use of hydraulic retarders that are blended with mechanical disc brakes.

The cab has a driver-machine interface developed in co-operation with the customer, and the vehicle has been prepared for operations using ETCS. Instead of using folding side mirrors, the driver views the side of the machine through four cameras mounted over the doors, while a fifth camera can be used to monitor the pantograph.

Two roof-mounted working platforms allow access to overhead wires and other structures, one platform having a vertical reach of 26 m and the ability to reach up to 9 m below the track, meaning that the vehicle could be used for viaduct inspections or repairs.

Robel is also producing 22 Type 40.44 rail loading trains for Swiss Federal Railways. All but two consist of pairs of flat wagons fitted with lateral cranes for lifting sections of rail up to 36 m long rail on and off the vehicles. The other two are six-wagon sets able to handle 120 m long rails.

Also due to be delivered shortly from Freilassing are two pairs of multi-purpose Type 54.17 works vehicles destined for urban operators in Germany, one of which will be on the display tracks in Münster. Each vehicle has a Deutz engine with particle filter for operation in tunnels; this powers the vehicle through a hydrostatic drive. The 90 kW rating is powerful enough for a pair of the vehicles operating in multiple to haul a U-Bahn trainset up a grade of 5%; radio remote control is fitted.

Robel is well known for its wide range of small machines such as power wrenches and drills, and small machines make up around 50% of the company’s workload. Unveiled at InnoTrans last September was an updated version of its classic 30.82 universal power wrench which is intended for use with track featuring bolt fastenings. More than 7 000 of these 30.82 units have been produced to date, and Robel hopes that the updated version will prove equally popular. The machine to be shown at Münster has an electric coupling and a digital display that enables precise setting of torque. Adjustments have been made to the handle design to improve the ergonomics, and Robel used a designer to enhance the machine’s appeal and improve handling comfort. Other changes include better lighting so that both left and right hand rails are illuminated without shadow. The design has been tested with 20 customers in Germany, Austria and Switzerland over 18 months, the supplier says.

Because of the shortage of capacity at Plasser’s Linz works, Robel is assembling a number of large machines under contract; these include a RPM ballast cleaner for German contractor Schweerbau. Robel also builds machines such as the SSP ballast plough as an independent supplier. The company also conducts its own research and development work and is currently working on several projects with Austrian Federal Railways.

Facilities available at Freilassing include a test track laid with different cants and irregular alignment to put tampers and liners through their paces both for demonstration and approvals processes. A second test track features different types of sleeper and fastenings.