SWEDEN: In an ongoing research project, Bombardier has started testing permanent-magnet traction motors as part of its strategy to develop more environmentally-friendly trains. Dr Harry Hondius reports from a 245 km/h test run between Stockholm and Västerås. 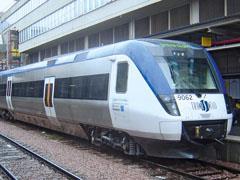 Bombardier has been working with Banverket and various Swedish research institutions for the past few years on a project to study ways of increasing train speeds with minimal changes to its existing track.

Banverket is an active participant in the programme, and the infrastructure manager is currently spending around 20% of its R&D budget on this work. It wants to be closely involved in the development of specifications for future trains which will minimise the impact on its track but are suitable for local climatic conditions. The Swedish winter sees fine snow and temperatures often oscillating around 0°C, alternately freezing and thawing the turnout switches, for example.

As reported last month, Banverket has submitted proposals to the Swedish government for creation of a 320 km/h high speed network linking Stockholm and Jönköping with Göteborg and Malmö. Involving around 750 km of new construction, this would cost in the order of €10bn to €15bn, but the view in Sweden is that such an investment would be worthwhile on a socio-economic basis.

A new generation of high speed trains would be needed to work these lines. In addition, SJ’s 43 X2000 tilting trainsets built between 1989 and 1998 will eventually have to be replaced. Banverket’s hope is that this can be done using trains with fast acceleration and excellent riding qualities, avoiding the need for tilt.

To augment its fleet, SJ ordered a build of 20 new inter-city EMUs in May, with an option for a further 20. The four-car sets are designed for 200 km/h operation, and are scheduled for delivery between April and August 2010. They are based on the successful stainless steel-bodied Regina trainsets that Bombardier has been delivering to Swedish local authorities for regional services; to date 70 two-car and three-car sets designated X50 to X54 have been built at Kalmar.

The SJ inter-city version, ordered at a cost of €221m (€26 000/m²), will be assembled at Hennigsdorf, with bogies from Siegen and electrical equipment from Västerås, which is also responsible for overall project management.

As a taster for its display at Inno-Trans 2008, Bombardier invited Railway Gazette International to a test run on August 7, including an update on the Gröna Tåget project and its ECO4 strategy to make trains more environmentally-friendly. This took place on the Stockholm – Västerås line, where a maximum of 245 km/h was reached between Grillby and Tortuna.

Taking advantage of reduced traffic during the summer holidays, the research team has been able to lease a Regina EMU for the test programme between June and October each year. This year leasing company AB Transito has provided X52 set 9062. Standard Regina sets have three of their four bogies powered, but for last year’s tests the unit was modified with all axles powered by three-phase motors using gearboxes from MC Watteeuw of Belgium. This year only three motored bogies are being used.

In a move away from the actively-steered mechatronic bogie tested last year, both cars DMA and DMB have been fitted with 'soft’ bogies. This is a further development of the long-established ASEA self-steering bogie which used long metal/rubber primary springs to permit a degree of passive radial steering in curves greater than 150 m to 200 m radius, depending on the taper of the wheel treads. Using coil springs and 1:30 wheels, the designers have now trimmed the resistance in the linkage and suspension in such a way that some radial steering is still obtained during curving, whilst ensuring sufficient stiffness for stable running at higher speeds on straight track.

In addition, car DMA has been equipped with Active Lateral Suspension, a modified secondary suspension and an instrumented wheelset. ALS uses transverse damping to increase the lateral ride comfort and help keep the body in a centred position. This seems to work well, providing a similar degree of ride comfort at 250 km/h as a conventional bogie at 200 km/h. If adopted, it would allow future Regina derivatives to have a 3 600 mm wide bodyshell against the current 3 450 mm.

The secondary air springs in car DMA have been equipped with an auxiliary reservoir to provide a larger air volume and a quick-acting valve to improve vertical ride comfort. This had a positive effect, in that car DMA rode much better in terms of vertical oscillation than DMB, which frankly had a bit of a tendency towards 'tap dancing’ at speeds over 210 km/h.

On car DMA manufacturer ?Schunk is testing pantograph behaviour at higher speeds, with the contact pressure increased from the usual 30 or 50 kN to 90 kN for running at 280 km/h. KTH is responsible for monitoring the ride quality.

Bombardier is testing its new Mitrac permanent-magnet motors on the inner bogie of car DMB; the outer bogie of this car is unpowered. Car DMA is powered by asynchronous motors on both bogies. Trials in June and July focused primarily on pre-testing of the PM motor, after which the ALS and soft suspensions were to be tested against the UIC 518 ride dynamics standards during July and August. Finally, a reliability test of the PM motors and the mechatronic bogie are scheduled for September and October.

This year, the train will retain some experimental equipment when it returns to regular service, allowing reliability testing on the mechatronic bogie and PM motors under winter conditions from November to June.

The permanent-magnet motor is part of Bombardier’s ECO4 research strategy, which focuses on the four Es: save Energy by increasing Efficiency, improving Economy and become more Ecological.

Developed at Västerås, the synchronous PM motor is continuously rated at 302 kW, with a maximum power of 1 046 kW at 5 000 rev/min. Overall efficiency at full load is put at 97·1%, which is around 3·5% better than a comparable induction motor. Similar efficiencies are achieved at partial loadings. The self-ventilating motor weighs 550 kg, or 1·79 kg/kW. This is much the same as an asynchronous motor with external air cooling. The fully-suspended motor drives the axles through a Watteeuw semi-?suspended gearbox.

Bombardier engineers believe that the permanent-magnet motor has the potential to become the leading traction drive for the future, and may supersede the induction motor in much the same way that this largely replaced the DC motor from 1985 onwards. The company is currently building its traction motors at Hennigsdorf and Pittsburgh, and through a joint venture in China.

Bombardier hopes that applying its ECO4 principles to the Gröna Tåget will result in an overall energy saving of around 50%. Of this, a conservative 2% saving in traction energy is expected from the adoption of PM motors. Another 15% will come from using the EBI Driver Assistance software, which seeks to balance continuously the power requirement with maintaining an optimum schedule. This system is also being tested on the demonstrator this summer. Around 12% could be saved through the use of aerodynamically-optimised nose ends, adapted to the design speed.

A final 20% saving of traction energy would come from the adoption of the Mitrac Energy Saver. Based on earlier trials of on-board energy storage using supercapacitors on a Mannheim tram, Bombardier believes that this level of energy saving is possible where the stopping and starting conditions are right. In addition, the builder expects that smarter air-conditioning equipment could save up to 40% in energy use for heating and cooling.