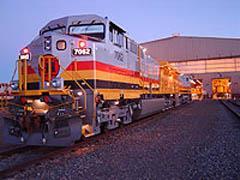 AUSTRALIA: GE Transportation and United Group have signed a series of 10-year sales agreements extending their on-going co-operation in the Australian locomotive market

UGL Rail will remain the Australian distributor of GE Transportation locomotives, including the Evolution Series, and will design and build locomotives using GE technology. It will also continue to provide spares and servicing.

UGL Managing Director & Chief Executive Richard Leupen said the firm was delighted to formalise its relationship with GE Transportation, which has been running for more than 40 years. 'UGL also has a strong ongoing relationship with GE in the power and water sectors, as well as in areas such as security and property services', he said. 'This reflects our ongoing strategy of forming partnerships with the world's leading technology providers.'

Around 500 locomotives from GE Transportation and UGL Rail are currently in service in Australia.