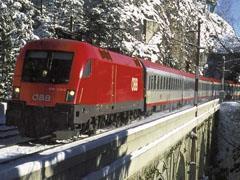 AUSTRIA: Plans to run passenger services in competition with Austrian Federal Railways were unveiled in Wien on October 16. Starting in 2011, trains would run hourly between Wien and Salzburg, with Bratislava and München to follow if they are successful.

The project is the brainchild of industrialist Hans-Peter Haselsteiner who has teamed up with former Managing Director of ÖBB-Personenverkehr AG Stefan Wehinger to found RAIL Holding AG; Wehinger’s contract with ÖBB was not renewed earlier this year. RAIL Holding would set up an operating company called WESTbahn GmbH and invest a total of €120m, of which around €100m would be used to acquire a fleet of seven eight-car double-deck trainsets, probably in a leasing deal with Stadler. Each 200 m long train would seat about 600 passengers, and maximum speed would be 200 km/h.

Haselsteiner is reckoning with much lower overheads than the national operator thanks to a back office staff of just 30, although up to 500 people would be employed in the long term – each coach would have its own attendant. Fares would be set to compete with second class travel on ÖBB, with ticket sales onboard and online.

Haselsteiner is Chairman of construction group Strabag, and in May this year Strabag announced that it was setting up its own rail freight company which is due to launch in 2009 with 20 locos and 600 wagons.