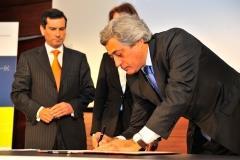 High speed rail authority RAVE announced in December that the ELOS consortium had been selected to build the eastern section of the Lisboa – Madrid route between Poceirão and Caia, with the aim of completing contract negotiations by the end of March.

Total cost of the line is now put at €1 359m, which RAVE says is 40% less than the original budget when the project was launched in 2005. Of this, the concessionaires will contribute 49%, infrastructure manager Refer 3% and the Portuguese government 7%. The remaining 41% will come from EU funds, including €197m from the TEN-T programme. Annual maintenance costs are estimated at €12·2m. The state contribution will be paid at €41m/year over the 35-year operating period (2014-49) in recognition of the environmental and social benefits offered by the new line.

As well as the 165 km section of high speed line running from the outskirts of Lisboa to the Spanish border and a new station at Evora, the concession covers construction of a single broad-gauge freight track alongside the double-track standard-gauge alignment over the 92 km from Evora to Caia. This will provide a direct route to Spain for freight traffic to and from the port of Sines.

The line is due to be completed by the end of 2013, helping to reduce the journey time between Lisboa and Madrid to 2 h 45 min.