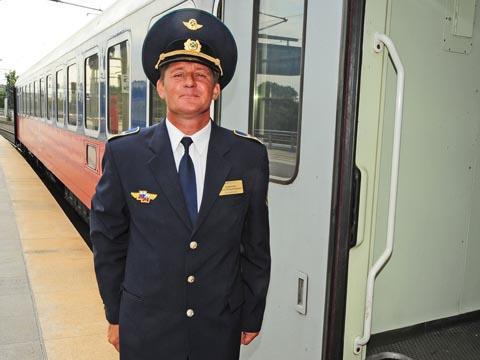 RUSSIA: RZD has ordered 200 sleeping cars which will be supplied with interchangeable standard and broad -gauge bogies for services to central and western Europe. A contract was signed with Siemens Mobility and Transmash Holding's TVZ subsidiary onboard a Sapsan high speed train on July 30.

According to RZD, these will be the first Russian-built coaches meeting RIC standards for use on the rail networks of UIC members, as RZD's current fleet of 232 RIC vehicles was imported from Germany.

Siemens' share of the contract is worth €320m, and includes supplying the 1 435 mm gauge bogies, major parts of the bodyshells and interior components, as well as certifying the coaches for international traffic. Tver Carriage Works will produce the 1 520 mm gauge bogies and assemble the cars in 2010-15.

The coaches will be designed for 200 km/h operation, with the possibility of upgrading for 250 km/h.

'We are definitely committed to becoming the main foreign partner of RZD', said Hans-Jörg Grundmann, Chief Executive of Siemens Mobility. 'With the order won today, we have taken another step toward that goal.'