CZECH REPUBLIC: The Velim test circuit has been the subject of considerable media attention as it has been testing Pégase, Alstom’s AGV demonstrator and AnsaldoBreda’s first Albatros trainset, which will be deployed on NS Hispeed services between Amsterdam and Brussels. 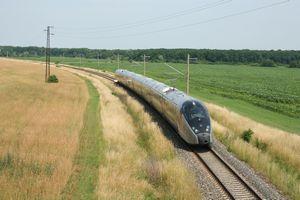 Having served the Czech railway industry for more than 40 years and acted as a fully-accredited European test centre since March 1995, VUZ, the research institute that owns and operates the Velim facility, faces some important decisions.

'We need to offer our customers improved quality within the current infrastructure’, explains Antonín Blazek, Director-General of VUZ. No major expansion of the site is planned in the short term, but significant renewal of the existing equipment is required to keep pace with the expectations of the customers using it. 'The power supply system is more than 40 years old’, says Blazek, but he recognises that replacing it is an expensive project. VUZ is seeking a contribution from the EU Innovation Fund, and other financing options are being considered.

The other key focus is the implementation of ERTMS technology. Given its proximity to the Praha – Brno main line, the circuit is already covered by the Czech GSM-R network, and equipped with ETCS Level 1. It is planned to include Velim as part of the Kolin – Porícany ETCS Level 2 trial (p794).

Blazek adds that customers are increasingly keen to manage noise emissions as part of the testing process, and additional measuring equipment has been installed around the 13·2 km main ring. Experts from Technische Universität Berlin have validated the equipment, confirming that it meets EU standards for TSI Noise testing.

Regenerative braking can also be accommodated by the 15 kV 16 2/3 Hz and 25 kV 50 Hz power supplies on both the main ring and the shorter 4 km loop. A 1·5 km stretch of the longer circuit can be equipped for third rail supply to cater mainly for metro operators, but Blazek emphasises that 'for the right customer with an agreed contract, we are prepared to invest in any power supply system they require’.