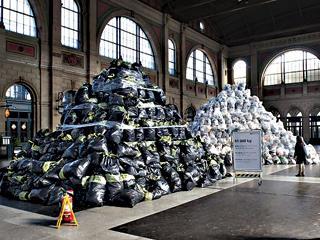 SWITZERLAND: Three days' worth of litter was collected by staff at Zürich Hauptbahnhof and put on public display to mark the launch of SBB's campaign to keep the network tidy.

Noting that there has been 'a recent increase' in the amount of rubbish left on trains and at stations, SBB has sought out the backing of a number of Swiss music and television stars to remind passengers to use litter bins and to leave unwanted newspapers and magazines on overhead shelves. SBB stresses that tidiness has a 'strong influence' on passengers' perception of railway safety and security.

Younger passengers have been invited to play 'Trashbusters', an online game hosted on the SBB website. Players adopt an animated character based on one of SBB's celebrity backers; each 'litter hunter' is tasked with rescuing the Princess - a representation of television anchor Christa Rogozzi - from 'the clutches of the litter monster'. The game is available to download as an Apple or Google Android smart phone app.