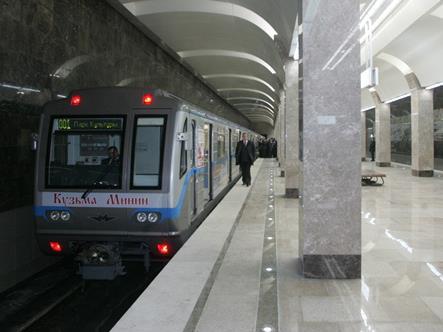 RUSSIA: An extension of the Nizhny Novgorod metro over a 1·3 km double-deck road and metro bridge opened to the public on November 5, after the regional governor and mayor attended inauguration ceremonies the previous day.

The city's first metro line opened in November 1985, serving the main railway station at Moskovskaya and the low-lying districts of the city to the west of the River Oka.

The latest 3·4 km extension of the Avtozavodskaya Line from Moskovskaya crosses the river on the 1·3 km bridge, which opened to road traffic in November 2009. The line then runs underground to Gorky station, serving the historic city centre situated on a hill on the east bank.

The metro service pattern has been revised with the opening of the extension. Trains on the Avtozavodskaya Line previously reversed at Moskovskaya, continuing as Sormovskaya Line services. The two branches have now been separated, with cross-platform interchange at Moskovskaya, which has four platform faces. Trains run every 6 min.

Design work is underway for a continuation of the Avtozavodskaya Line beyond Gorky to Operanyi Teatr and Sennaya, and for an extension of the Sormovskaya Line to Strelka where a new stadium is planned for the 2018 FIFA World Cup. Federal funding is being sought for these extensions, to augment local sources which have funded the current project.