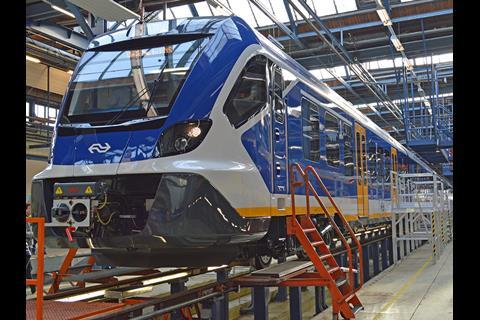 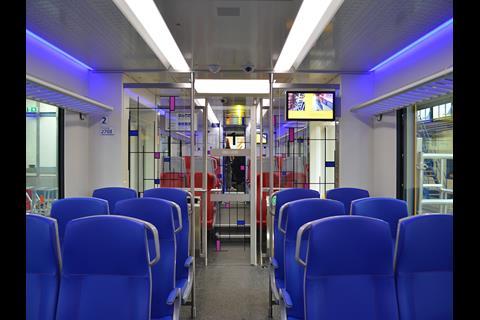 NETHERLANDS: The first four-car CAF Sprinter electric multiple-unit for NS was unveiled at NedTrain’s Zaanstraat depot in Amsterdam on October 19.

In 2014 NS selected CAF for an order to supply 68 three-car and 50 four-car units from its Civity family. An intensive test programme is planned before the EMUs enter service from autumn 2018. They will initially be deployed on routes from Den Haag to Leiden, Amsterdam, Schiphol Airport and Zwolle, and from Zwolle to Utrecht, Groningen and Leeuwarden.

The interior is intended to provide an open and modern look, with glass partitions between the first class area with red seats and second class saloons with blue seats. There is a multi-purpose area for bicycles and wheelchairs, with level boarding and retractable steps at all doors.

Passenger facilities include wi-fi, 220 V and USB sockets and waste separation bins. Following criticism of the previous generation of Sprinter Light Train which was ordered without toilets, the CAF units have wheelchair-accessible toilets with bioreactors.