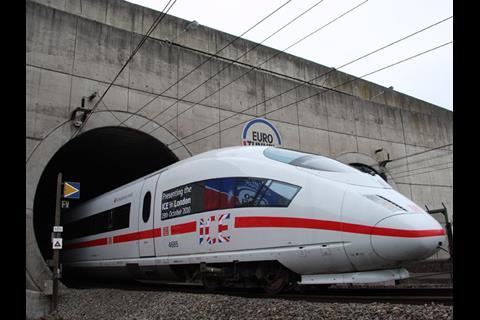 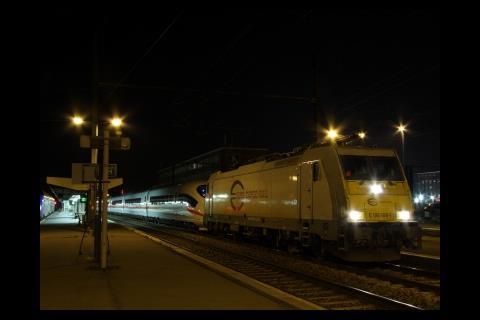 EUROPE: As part of its bid to introduce ICE services between Germany and London by the end of 2013, Deutsche Bahn is preparing to undertake evacuation trials in the Channel Tunnel over the next few days.

A pair of Class 406 ICE3 sets was dispatched from the Griesheim workshops near Frankfurt on October 11, arriving at Calais-Fréthun later the same night.

Hauled by a Traxx Class 186 electric locomotive belonging to DB Schenker subsidiary Euro Cargo Rail, the two multi-system trainsets being used for the trials are of different models. ICE3M set 4610 is certified for operation in Germany, Belgium and the Netherlands, whilst ICE3MF set 4685 is equipped with ETCS and TVM430 for use on services to Paris via LGV Est.

One unit will be displayed at St Pancras International on October 19, when DB Chairman Dr Rüdiger Grube will be joined by German Transport Minister Dr Peter Ramsauer and UK Minister of State for Transport Theresa Villiers.

DB has applied to the Intergovernmental Commission responsible for safety in the Channel Tunnel for permission to operate 200 m long trainsets, either singly or in multiple. The IGC initiated a consultation on revising the safety rules last year, and indicated in March that it was minded to accept a number of changes. However, no decision was taken on the operation of trains less than 400 m long, subject to further investigation of the evacuation procedures.