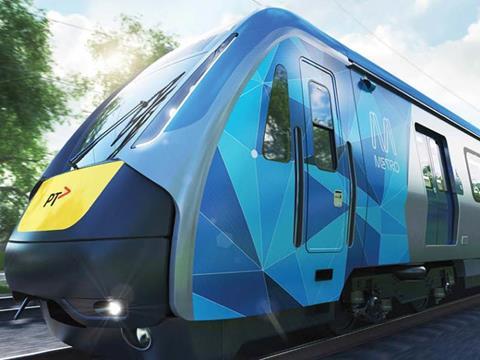 AUSTRALIA: The Evolution Rail consortium of Downer, CRRC Changchun Railway Vehicles and Plenary Group announced on September 12 that it had been selected as preferred bidder to supply 65 High Capacity Metro Trains for use on the Melbourne suburban network.

Evolution Rail beat two other consortia for the PPP contract: Bombardier (Bombardier Transportation Australia, Macquarie Bank, Itochu and Infrared Capital Partners) and Eureka Rail (Alstom, the Bank of Tokyo-Mitsubishi UFJ and John Laing). Financial close is expected by the end of the year.

Due to enter service from 2019, the electric multiple-units will be based on CRRC’s Type A design. They will have capacity for 1 380 passengers, including 26 wheelchair spaces. To include more than 60% local content, they will be built at Downer’s Newport facility in west Melbourne, which is to receive a A$16m upgrade. Downer CEO Grant Fenn said the project would create more than 1 100 full-time jobs in Victoria.

The contract also includes the construction of a new maintenance depot at Pakenham East and a light service facility at Calder Park. As well as maintaining the fleet for 30 years, Evolution Rail will be responsible for maintenance of the depots and two training simulators that are to be supplied.

The 1 600 mm gauge EMUs are intended to increase capacity on the Cranbourne – Pakenham line as part of a A$2bn project that also includes upgraded signalling and level crossing removals. Work has already started on elevating a 2·7 km section in southeast Melbourne to eliminate nine crossings. Five stations are being rebuilt, with two already demolished. Temporary stations at Carnegie and Murrumbeena are expected to open by September 26.