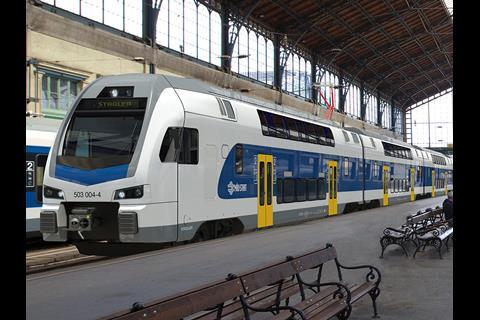 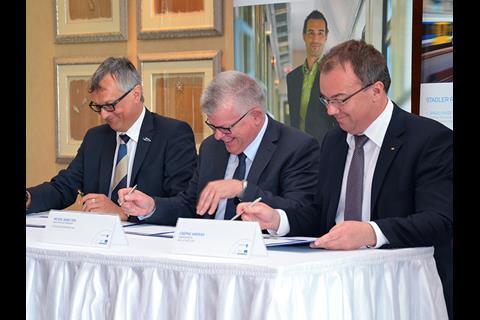 HUNGARY: A framework agreement for the supply of up to 40 Kiss double-deck electric multiple units including a firm order for an initial 10 was signed by national passenger operator MÁV-Start and Stadler on April 12. Stadler said these would be the first double-deck vehicles in Hungary when they enter service from spring 2019.

MÁV-Start had called tenders in December for the supply of up to 40 high-capacity EMUs over eight years, and the start of negotiations with sole bidder Stadler was announced on March 17. The framework contract covers the purchase of an initial 10 units worth €195m, including training and spare parts, and an agreement enabling MÁV-Start to place further firm orders subject to the availability of European Union funding.

To provide operational flexibility, the Kiss EMUs will be compatible with the 123 single-deck Flirt EMUs which Stadler has delivered to MÁV-Start over the last 10 years. The six-car Kiss units will be 155·88 m long, 2 800 mm wide and 4 600mm high, with 600 seats to provide a 50% increase in capacity compared to a single-deck unit of the same length. They will have with four toilets, one being accessible for persons with reduced mobility, and multifunctional areas for four wheelchairs as well as 12 bicycles or five pushchairs. There will be a ‘state-of-the-art’ passenger information system, and free wi-fi.

The 25 kV 50 Hz EMUs will have national and ETCS Level 2 train control systems, and will be able to run at up to 160 km/h on suitably upgraded routes.