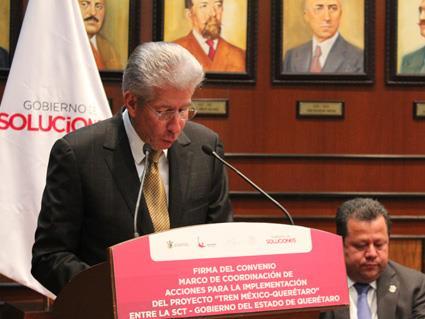 MEXICO: On January 28 Secretary of Communications & Transport Gerardo Ruiz signed an agreement with José Calzada, Governor of the state of Querétaro, setting out how the federal and state governments are to co-operate on the project to build a new line for passenger services between Mexico City and the city of Querétaro.

Depending on the technology and route chosen, the line would be around 200 km long and services would operate at up to between 160 km/h and 180 km/h to link the two cities in under 2 h. Ruiz said that feasibility studies were now underway to consider technical, economic, financial, legal and environmental aspects of the project, announced by President Enrique Peña Nieto when he took office on December 1.

The federal government has also signed a co-operation agreement with the state of Yucatán, covering the project to build a new line for passenger and freight traffic from Mérida to Puerto Venado in the neighbouring state of Quintana Roo. Incorporating existing infrastructure between Mérida and Valladolid which is to be upgraded, the 278 km route across the Yucatán Peninsula would also be engineered for passenger trains operating at up to between 160 km/h and 180 km/h. Ruiz said that spending of 30m pesos on the project in 2013 had already been approved, including environmental studies and the preparation of a business plan, which should enable tenders for civil works to be called ‘as soon as possible’.