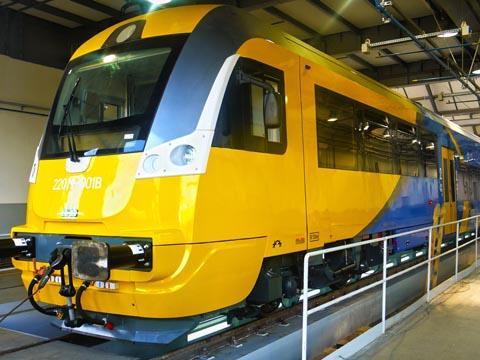 POLAND: Newag has unveiled its first Type 220M diesel multiple-unit at its Nowy Sacz plant. Following acceptance trials in August the DMU is expected to enter passenger service by September.

Pomorskie voivodship has ordered six of the DMUs at a cost of 50·4m zloty, with deliveries scheduled to be completed by January 2011. Two of these will be two-car sets with 140 seats, and the other four will be a three-car variant offering 190 seats.

The units are partly low-floor, with two wheelchair spaces and room for six bicycles. They have a passenger information system and air-conditioning.

Each unit has two under-floor powerpacks driving the end bogies, which are modified from the design used on the 19WE electric multiple-units supplied to SKM Warszawa.