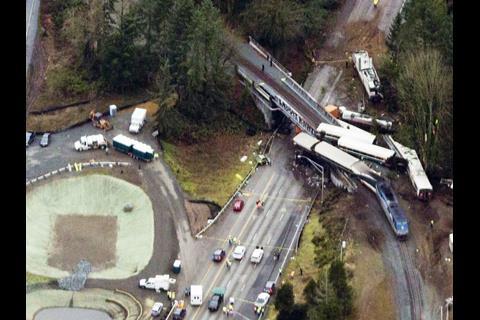 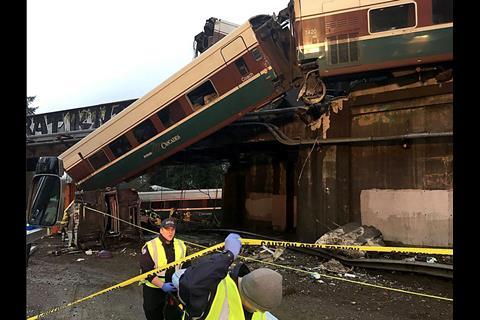 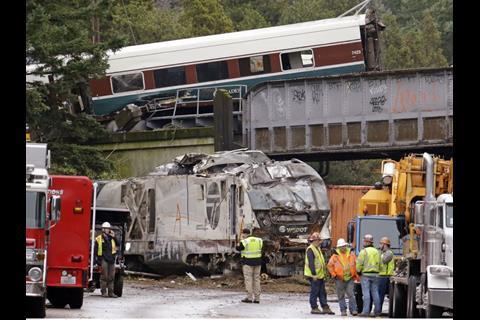 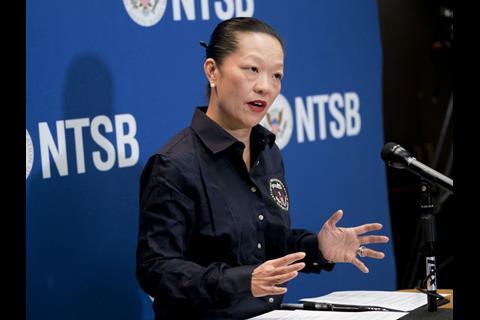 USA: Excessive speed has been identified as a key factor in the derailment of Amtrak Cascades’ Seattle – Portland train 501 near Tacoma on December 18, according to the National Transportation Safety Board.

The 12-car Talgo 6 trainset, hauled by a new Siemens Charger diesel locomotive with a GE P42 at the rear, left the tracks at DuPont, on a curve leading to a bridge over the I-5 highway. The lead locomotive and several coaches fell into the road, and three of the 77 passengers were killed, including two representatives of the All Aboard Washington pro-rail lobby group.

An Amtrak Cascades service operated under contract to the states of Washington and Oregon, the southbound train was the first Amtrak service to use the Point Defiance Bypass, a cut-off being developed by Sound Transit and Washington State Department of Transportation with support from federal stimulus funds.

The $181m seven-year project has upgraded a 28·9 km section of a former BNSF freight route to bypass a long, slow section of the existing coastal route, permitting the extension of ST’s Coaster commuter rail service to Lakewood and shortening Amtrak journey times. Much of the route is cleared for 127 km/h, but there is a 50 km/h limit on the curve leading on to the I-5 bridge, shortly before the bypass rejoins the original route.

In a briefing on the day after the accident, NTSB investigators confirmed that the train had been travelling at around 128 km/h approaching the curve. While Positive Train Control was being fitted to both track and train, it was not yet operational; the equipment was expected to be commissioned in the first quarter of 2018. The line is controlled by Sound Transit using conventional CTC, which NTSB Board Member Bella Dinh-Zarr pointed out was not able to enforce permanent speed restrictions in the same way as PTC.

Dinh-Zarr said the train’s emergency brakes had been activated automatically and not applied by the driver, who remains in hospital along with four other Amtrak crew members. Testing of the new line began in January, and all of the crew had operated non-revenue trains over the bypass for at least two weeks before the accident. However, the driver had been accompanied in the cab by a second crew member learning the new route, and investigators will consider whether this may have led to a loss of situational awareness.

NTSB lead investigator Ted Turpin said the team would be assessing the training programme and the amount of time allowed for staff to become familiar with the new route. He said that under Amtrak policy, the driver ‘couldn’t run this train without being qualified and running this train previously’.

In its report into an April 2016 collision between a passenger train and track maintenance machinery on the Northeast Corridor, NTSB had been highly critical of Amtrak’s safety culture, suggesting that there may have been a ‘systemic problem’, with inconsistent approaches to safety throughout the organisation.