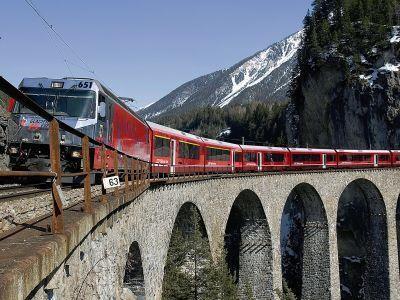 SWITZERLAND: Rhätische Bahn has signed a SFr110m contract with Stadler for the supply of seven new-generation trainsets to operate principal services on the Albula main line between Chur and St Moritz. The deal forms the third stage in RhB’s rolling stock renewal programme, bringing the total order value to SFr310m.

The deal was signed in Samedan on December 20, as part of a farewell tour by RhB Chairman Erwin Rutishauser, who is retiring after six years at the head of the management board. As part of the trip, one of the railway's new Allegra EMUs set a new Swiss metre-gauge speed record of 145 km/h on the southern end of the Vereina tunnel line between Klosters and Sagliains.

The seven six-car trainsets are due for delivery by early 2013. Unlike the earlier orders for EMUs, the air-conditioned Albula trainsets will be loco-hauled, allowing the trains to be augmented by conventional stock at peak times.

Although described as 'articulated', each set will be formed of two first and four second-class vehicles, which will be carried on two bogies per car. The fixed-formation trainsets will include one vehicle with a low-floor area providing wheelchair spaces and an accessible toilet. Each train will also incorporate a family compartment with children’s play area, plus a small panoramic saloon.

The first 15 three-section dual-voltage Allegra EMUs ordered for SFr150m in May 2007 under Stage I of the programme are now entering service on the Bernina, Arosa and Davos lines. Stage II covers five four-section single voltage EMUs for local services between Schiers and Rhäzüns and between Chur and Thusis. Ordered at a cost of SFr50m, these are due to enter service by mid-2012.