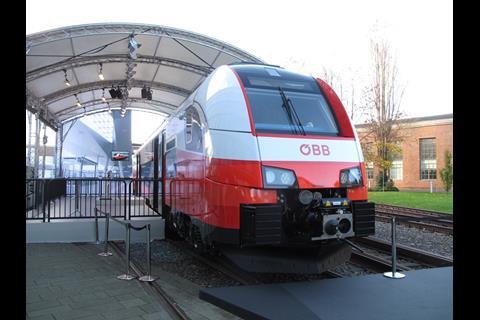 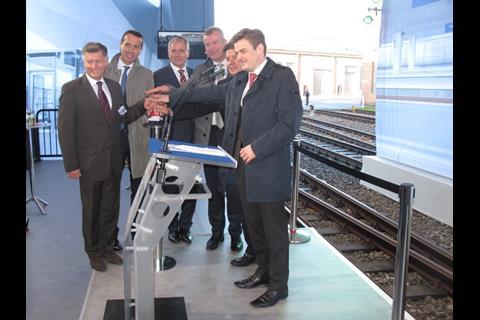 AUSTRIA: The first of 101 three-car Desiro EMUs which Siemens is building for ÖBB was unveiled at the company’s Uerdingen plant on November 10, in a ceremony attended by Federal Minister of Infrastructure Alois Stöger, ÖBB Chief Executive Christan Kern and Siemens Mobility CEO Jochen Eickholt, along with the provincial governors from Niederösterreich, Oberösterreich and Steiermark.

Branded as cityjet by ÖBB, the €550m order comprises 31 trains for the Wien S-Bahn network, 35 to operate regional services in Niederösterreich, 18 for Steiermark and 17 for Oberösterreich.

Following commissioning and trial running at Wildenrath, which is due to start immediately, the first EMU will undergo climate testing in Wien. The first five units are expected to enter service from the end of 2015, with deliveries to be completed in 2018.

Under what both parties described as an ‘excellent co-operation’, the first 21 units will be manufactured in Uerdingen, and the remainder will be assembled locally at ÖBB’s maintenance depot in Jedlersdorf, using painted car bodies supplied by Siemens complete with windows, doors and bogies.

The three-car units are 75 m long and 2 820 mm wide, with entrances 600 mm above rail; each is powered by eight motors rated at 235 kW, giving a maximum speed of 160 km/h. The S-Bahn version will have 244 seats and six doors per side, while the regional variant will have four doors and 259 seats.