CHINA: With 6 227 km of route already completed for operation at speeds of 200 km/h and a further 6 100 km of high speed line under construction during 2007, China's Vice-Minister of Railways Lu Chunfang told delegates at UIC Highspeed in Amsterdam that work was about to start on a further 10 projects. 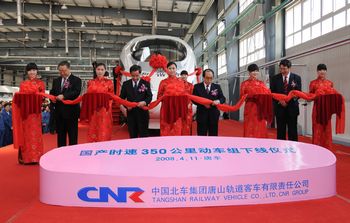 He anticipated that by 2020 the country's network of Passenger Dedicated Lines would reach 18 000 route-km. Meanwhile, he explained, technical development is forging ahead to permit operation at 300 to 350 km/h with trains running at 3 min headways. Lu also confirmed that China will be hosting the next UIC Highspeed congress in Beijing in 2010.

Meanwhile, attention is focusing on the 115 km Beijing - Tianjin route, where Chinese Railways expects to launch a high-frequency shuttle service on August 8 to connect the Olympic Games events taking place in both cities this summer. CR wants to have 10 trains in service during the Games - five Kawasaki-derived CRH2-300 sets and five of the Siemens-designed Velaro CRH3s. Olympic services are intended to operate at least at 250 km/h, with CR expecting to run a 10 min interval service from 06.00 to 22.00.

The first CRH3 to be assembled in China was formally rolled out at Tangshan Locomotive & Rolling Stock Works on April 11. The builder claimed that it was the first Chinese-built train to be designed for 350 km/h operation, marking the domestic industry's progress from the production of 200 km/h EMUs to the manufacture of world-standard high speed trains.

Part of the China Northern group, Tangshan is supplying 60 eight-car CRH3s in partnership with Siemens under a €1·3bn contract signed in November 2005. The first three trains are being assembled in Germany; the remainder will be built in China, with Siemens supplying components under a technology transfer agreement. The first five trainsets are due to enter service on the Beijing - Tianjin line this summer, and all 60 are to be delivered by the end of 2009.

The first Siemens-built CRH3 arrived in China at the end of January, having been dispatched in December. It had originally been scheduled for delivery at the end of March, but the date was brought forward at the ministry's request in order to have the trains available for the Olympic Games. The second set was dispatched from Hamburg at the end of February, and was expected to arrive in China during March. Roll-out of two more locally-built sets will follow shortly, with five trains due to be completed by the end of this month and handed over to CR by the end of July.

According to Siemens, the first CRH3 has already been trialled on a 1·2 km test track at Tangshan, where 80 km/h was reached. It is due to transfer shortly to the CARS ring in Beijing, where tests at speeds up to 180 km/h will be possible.

The welded aluminium bodyshell of the CRH3 is around 300 mm wider than previous Velaro designs, permitting 3+2 seating in second class. The total capacity is 557 passengers, including one first class car and first class areas behind the cabs. The seat reservation system and catering facilities have been adapted to meet local requirements.