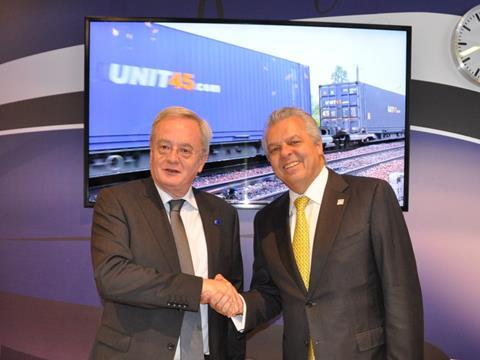 A key step towards greater regulatory co-operation between the European and Brazilian railway sectors was taken on September 23, with the signing at InnoTrans of a Memorandum of Understanding between Jorge Luiz Macedo Bastos, General Director of Brazilian land transport agency ANTT and the Executive Director of the European Railway Agency Marcel Verslype.

The signing of the MoU follows initial discussions at an EU-Brazil summit in February, when the two agencies committed to seeking closer co-oepration, drawing up an action plan to develop mutual recognition on technical requirements, conformity assessments and standards in a number of specific areas.

Brazil is currently investing heavily to revitalise and expand its rail network, and is planning to open up the rail market to competition. As part of this, Bastos confirmed that the intention is to adopt the European model of vertical separation between infrastructure management and train operations. He envisages the development of an interoperable network including several high speed lines as well as high-capacity mixed traffic freight and passenger routes. To this end, ANTT feels it is important to share information about European regulatory systems, capacity allocation processes and technical standards.

ERA says that a bi-lateral exchange of experience in the field of interoperability and safety will be at the top of the agenda, along with signalling and communications regulations, Technical Specifications for Interoperability and the European Rail Traffic Management System, which the agency feels ‘has become a standard of reference world-wide for railway safety and capacity optimisation’.