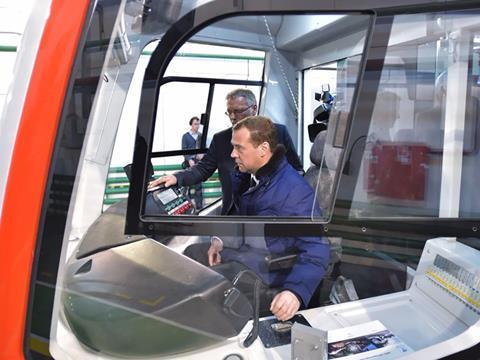 RUSSIA: Details of government support for the rolling stock manufacturing industry were set out by Prime Minister Dmitry Medvedev on February 9.

Speaking at Tver Carriage Works during a conference on the prospects for the rolling stock industry, Medvedev said the government’s objective was to ensure the profitable production of modern, safe and innovative vehicles so that the sector which employs more than 200 000 people becomes an ‘economic growth point’.

He has signed a directive approving a 7bn rouble government support programme for rolling stock builders in 2016. This bans operators from using life-expired vehicles, reimburses operators for the costs of procuring new vehicles, and provides subsidies for the development of innovative wagons. VAT on long-distance passenger services has been cut from 18% to 10%, with operators – primarily RZD’s Federal Passenger Co – required to spend the difference on the procurement of new stock. Innovative wagons will also receive a discount on empty mileage, reflecting their lower impact of the infrastructure.

Medvedev said Russia’s economic downturn had brought a 37% decline in the rolling stock market last year. Stimulus measures supported contracts for the production of an additional 10 000 vehicles, with 1bn roubles in subsidies provided for technical modernisation and 1·5bn roubles to pay interest on working asset loans. A further 60bn roubles from the National Wealth Fund was invested in RZD bonds to support the procurement of locomotives, and this is to continue this year.

Medvedev said the weakening rouble provides a significant incentive for rolling stock exports, which grew by almost two-thirds in 2015 with 1·4bn roubles of support provided. Loans are to be approved shortly to support a Metrowagonmash project for Hungary and the supply of Uralvagonzavod wagons to Iran and Kazakhstan.