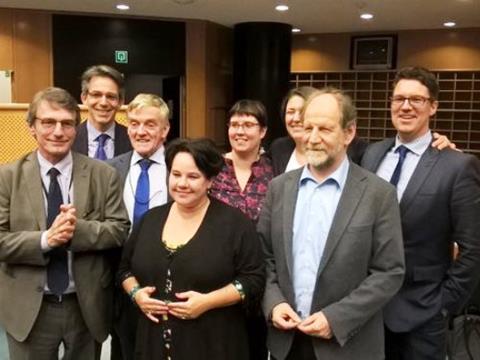 EUROPE: An informal agreement on the consolidated wording for the market pillar of the Fourth Railway Package was reached in Brussels on April 19, under the leadership of the Netherlands Presidency of the EU.

Unlike the technical pillar of the package which has already been agreed, and is due to be ratified by a plenary session of the Parliament later this month, the market opening proposals proved significantly more controversial. The three measures envisaged the full liberalisation of domestic passenger rail markets, with provision for open access competition, the compulsory tendering of public service obligation contracts, greater separation between infrastructure management and train operations and increased financial transparency.

Under the agreed text, open access competition in the domestic passenger market will be permitted from 2020, albeit tempered by the introduction of ‘safeguards’. From 2023 competitive tendering is to become ‘the norm’ for awarding public service contracts, but direct award contracts will still be permitted ‘in justified cases’.

TRAN Committee rapporteur for the market opening and governance proposals David-Maria Sassoli said ‘all the EP proposals have been accepted: on the powers of the regulatory body, on avoiding conflicts of interest between operators and infrastructure managers and on ticketing, but above all on open access for high speed rail’.

Transport Commissioner Violeta Bulc said the agreement ‘opens a new chapter for European railways’, which ‘for too long had no incentives to adapt to consumer demand’, leading to a decline of market share. She believed that ‘gradual market opening will improve the performance of rail services, create new investment opportunities and foster job creation. It should also encourage Europeans to make greater use of rail, contributing to our decarbonisation objectives. When railways become more attractive, everybody wins.

However, the European Rail Freight Association, representing new entrants in both the freight and passenger markets, described the compromise as ‘a missed opportunity’, which made ‘limited progress in achieving a competitive, sustainable and growth-orientated rail sector’. This would only benefit ‘other more polluting modes’, it warned, adding that it would also limit the scope for attracting private investment into the European rail market.

ERFA felt the outcome of the discussions had been dominated by the ‘vested interest of the rail monopolies, blindly supported by many EU national governments, who in the meantime plough ahead with truck platooning for freight services and liberalising their long-distance bus markets, while their state-run rail companies spiral increasingly into unsustainable levels of debt’.

The Commission’s provisions for financial transparency between infrastructure manager and train operators have been ‘diluted’, and ERFA felt there was ‘no real appetite for ensuring that public funds are used to stimulate investment’, and not to cross-subsidise loss-making operations. The association said it would continue to pursue ‘the right environment for attracting private capital’, genuine competition and greater innovation. It would work with rail regulators and enforcement authorities to ‘tackle head on the non-application or misapplication of basic EU rules ensuring non-discrimination and greater customer-orientation’, and with the competition authorities ‘in cases of unlawful state aid and abuse of dominant position’.

EIM Executive Director Monika Heiming pointed out that at this stage the agreement was only provisional, and said the independent infrastructure managers would be waiting to see the final wording.