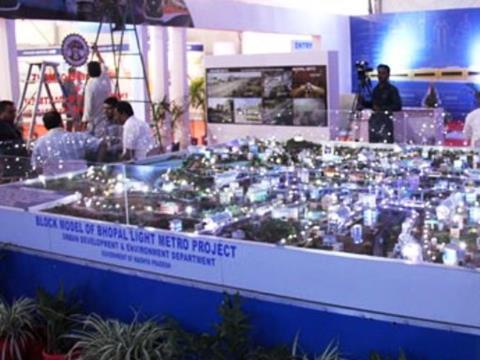 INDIA: The state government of Madhya Pradesh has reached agreement with the national government for the construction of metro networks in the cities of Bhopal and Indore, at an estimated total cost of Rs145bn.

Approved by the national cabinet in October, the two schemes are to be taken forward by Madhya Pradesh Metro Rail Co Ltd, a special purpose vehicle established by the state government which has been responsible for drawing up the initial proposals. MPMRC has already awarded contracts totalling Rs47bn to road construction company Dilip Buildcon for work on both projects, which are expected to be completed by 2023.

Bhopal is initially looking to develop two routes as the first stage of a planned six line network. The 15 km Line 2 with 16 stations would run from Karond Circle in the north of the city to AIIMS in the southeast, while the 12·9 km Line 5 would link Bhadbhada Square in the west to Ratnagiri Tiraha in the east, serving 14 stations. The two routes would link many of the key areas in the city, intersecting at Bogda Pul to the south of the city centre.

Line 2 would be mostly elevated, but with a short tunnelled section including two underground stations serving the main Indian Railways station at Bhopal Junction and Bhopal Bus Station. Line 5 would be elevated throughout. Estimated cost of the two lines is put at Rs70bn. The national and state governments are expected to provide much of the financing through matching equity stakes, with further funding coming through a loan from the European Investment Bank.

Indore is planning to start with a 31·6 km ring line, which could later be augmented by three north-south corridors. The core section of Line 3 would run from the airport in the west to Bengali Square in the east via the city centre, including an interchange at the main IR station. The line would then turn north and loop around the northern suburbs to Ghandi Nagar, where the depot would be located just west of the airport. The line would serve 30 stations. Estimated cost is put at Rs75bn with the state and national governments again taking equal equity stakes. Additional financing for the Indore Metro will come through loans from the Asian Development Bank and New Development Bank.