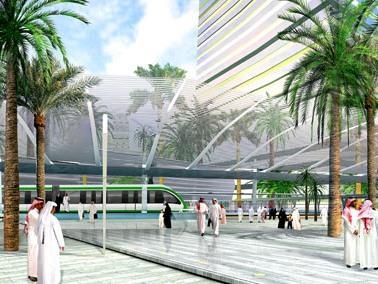 SAUDI ARABIA: Bombardier Transportation announced on May 31 that it had won a US$241m contract to supply, install and operate a 3·6 km driverless monorail in the King Abdullah Financial District in Riyadh. Intended to serve the city’s new financial and business centre which is currently being developed, the automated transport system is due to open in 2012.

The contract was awarded to Bombardier by local construction company Saudi Oger Ltd, which is responsible for building the turnkey monorail project. Saudi Oger had been selected on April 14 by the Rayadah Investment Co, acting on behalf of the kingdom’s Public Pension Agency which is promoting the project.

Bombardier will supply the E&M elements for the six-station monorail line, including six two-car Innovia Monorail 300 trains and Cityflo 650 automatic train control, together with project management, engineering and commissioning services. The vehicles will be designed in Kingston, Canada, and built at the Bombardier plant in Pittsburgh, USA.

Saudi Oger and Bombardier will operate and maintain the monorail for an initial period of 10 years. ‘The long-term nature of our operation and maintenance contract further underlines our commitment to building local roots in the Kingdom of Saudi Arabia and with other countries in the Gulf Co-operation Council’, said André Navarri, President & COO of Bombardier Transportation.