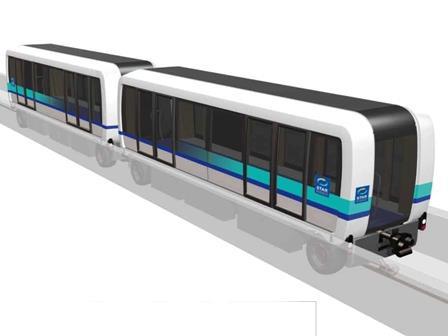 FRANCE: Mayor of Rennes Daniel Delaveau announced on November 16 that Siemens has been selected as preferred bidder by transport authority Rennes Métropole to build the city’s second driverless metro line. The €200m contract will be submitted to the city council for ratification on November 18.

The rubber-tyred Cityval is based on the Neoval concept developed by Siemens in conjunction with Lohr Industries. It uses the Translohr guidance system comprising two V-shaped rollers tilted at 45° which run along a central rail. The trains will be manufactured by Lohr in Alsace. The air-conditioned vehicles will have through gangways, large windows, real-time passenger information and CCTV video surveillance. Maximum operating speed is 80 km/h.

Line B will be 12·6 km long, running from Mermoz in the southwest to Champs Blancs in the northeast with 15 stations. The central section between Cleunay and Le Gast will pass under the city centre in a bored tunnel while the Cleunay-Mermoz and Le Gast-Chateaubriand sections will be cut-and-cover. The final 3·3 km from Chateaubriand to Champs Blancs will be elevated. Interchange to Line A will be provided at Sainte-Anne and Gares. Revenue service is envisaged in 2018.

Siemens previously supplied Rennes with automation technology and 16 rubber-tyred driverless VAL 208 cars for the 8·5 km Line A which opened in March 2002.