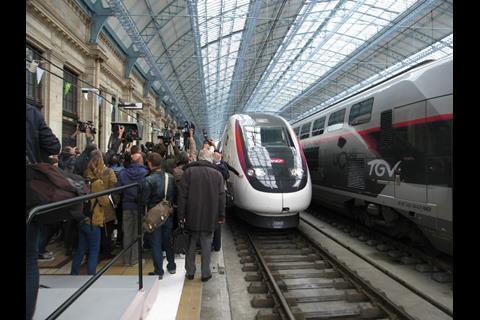 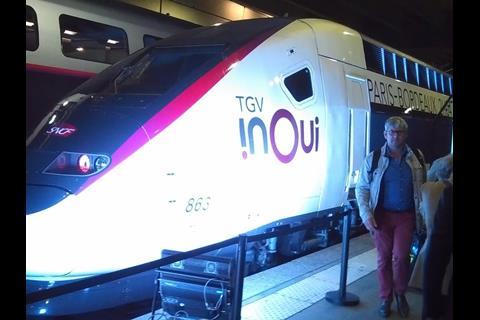 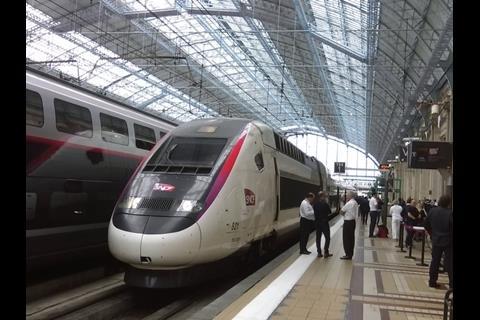 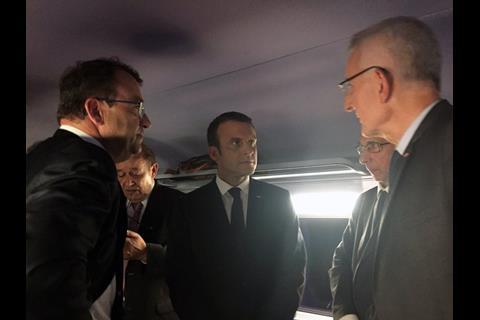 FRANCE: More than 500 km of new high speed line were officially opened on July 1, when SNCF operated special trains on LGV Sud Europe Atlantique and LGV Bretagne – Pays de la Loire, ahead of the start of commercial services the following day. Taking part in the events were President Emmanuel Macron and Transport Minister Elisabeth Borne, along with SNCF President Guillaume Pepy and the President of SNCF Réseau Patrick Jeantet.

The first special conveyed guests from Paris Montparnasse to Bordeaux Saint Jean; SNCF is now offering a fastest journey time of 2 h 4 min between the capital and Bordeaux. A second train left Bordeaux at 14.15 taking guests to Angers and Rennes to mark the simultaneous opening of LGV Bretagne - Pays de la Loire. Travelling via the ‘virgule’ at Sablé-sur-Sarthe, it joined LGV BPL where residents and photographers were waiting at the lineside to see another special TGV conveying President Emmanuel Macron from Paris, timed to pass just a few minutes later. Two bands and more crowds were waiting at Rennes, where Macron praised the ‘wonderful’ inaugural event. The day’s events concluded with a final special train returning to Paris Montparnasse at 23.55.

Inaugurated by former President François Hollande on February 28, the 302 km SEA line forms an extension of the southern arm of LGV Atlantique which was opened in September 1990. Operated by TGV l'Océane services with Inoui branded trains, the line is expected to generate 2·4 million additional journeys a year from 2019.

Promotional fares include Paris - Bordeaux or Toulouse for €25 with a Prem's ticket or just €10 on low-cost Ouigo services from Roissy Charles-de-Gaulle Airport to Bordeaux. Voyages SNCF Director Rachel Picard told Railway Gazette that SNCF intends to start running Ouigo services from Paris Vaugirard from 2018, with the aim of capturing 100% of the Paris – Bordeaux air market.

LGV BPL is a 182 km extension of the western branch of LGV Atlantique opened in 1989. Running from Connerré near Le Mans to Rennes, the line includes a spur feeding into the existing main line to Angers and Nantes. Fastest journey time from Paris to Rennes has been cut from 2 h 4 min to 1 h 25 min, and SNCF anticipates that 1·5 million more passengers a year will be attracted by the new service. Paris — Rennes or Nantes Ouigo fares start at €10, with Prem's tickets priced from €20.

Both new lines were built under public-private partnership concessions, and both include intermediate junctions to allow trains to serve destinations not on the high speed alignment.

During the celebrations at Rennes, Macron called for transport investment to be refocused on renovation of the conventional rail network and on improving people’s day to day travel. He promised that there would be new transport legislation in 2018 to set priorities and ensure fundability.

Nevertheless, planning is continuing for the proposed high speed line between Bordeaux and Toulouse, and Borne said the ministry would a challenge the recent decision to overturn the Declaration of Public Utility for part of this route.

For more on Inoui and Ouigo read our exclusive interview with Rachel Picard in the July 2017 issue of Railway Gazette International magazine.