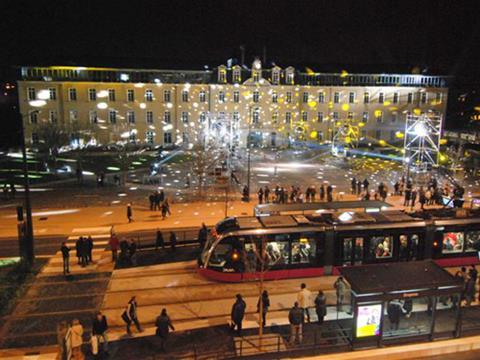 FRANCE: Dijon's second tram route entered service on December 8, running for 11·5 km from Valmy in the northern suburbs to Chenôve Centre in the south and serving a total of 21 stops.

Three stops in the city centre are shared with the 8·5 km line T1 from the SNCF station to Quetigny Centre which opened on September 1 (RG 10.12 p14).

Operated by Keolis as part of the Divia network, T1 has carried an average of 36 000 passengers a day during its first two months in service, 6 000 more than the highest forecasts according to the Greater Dijon Authority. Two extra cars are to be deployed to reduce peak headways from 6 m to 5 min on T1, while T2 services now also serve the busiest section between Gare and République.

'The tram has changed the city - for the better - it has transformed our lives', said François Rebsamen, President of the Greater Dijon Authority, who saw the new network as a tool for the development of Dijon as capital of the Bourgogne region.