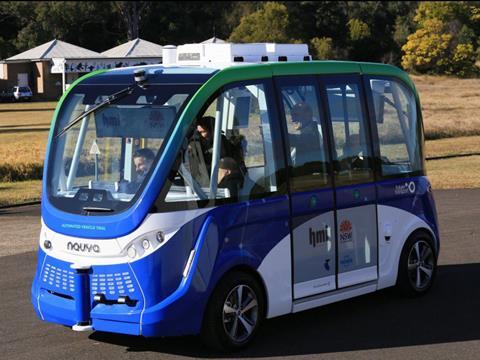 AUSTRALIA: A two-year trial of a driverless shuttle is due to begin later this month at Sydney Olympic Park, the New South Wales government announced on August 2.

Testing of a driverless shuttle supplied by Navya will shortly begin on an enclosed pre-programmed route at Newington Armory. The NSW government expects office workers at Sydney Olympic Park to begin using the shuttle next year. Legislation to allow the trial to go ahead has been introduced into parliament.

The NSW government and Sydney Olympic Park Authority are working with HMI Technologies, NRMA, Telstra, IAG on the project. The NSW government has established the Smart Innovation Centre to work with industry for the development of similar trials.

‘We want to use the trial to help develop the systems that will enable automated vehicles to be connected to our infrastructure, like traffic lights and to our customers through their devices and applications’, explained NSW Roads, Maritime and Freight Minister Melinda Pavey. ‘It’s the combination of connectivity and automation that will provide the safety and mobility benefits we are looking for.’