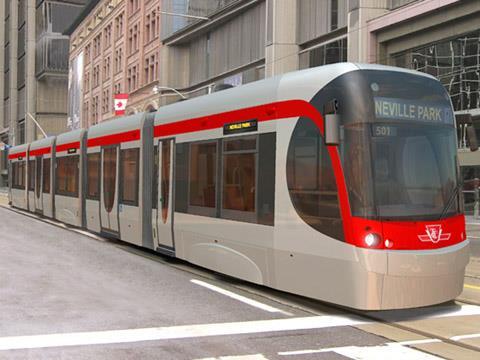 CANADA: Toronto Transit Commission voted unanimously on April 27 to confirm the selection of Bombardier's Flexity Outlook low-floor tram design as the base model for its next generation fleet, following a recommendation by officials the previous week. Toronto is planning to purchase 204 articulated trams to replace its 248 Canadian Light Rail Vehicles supplied by SIG and UTDC in 1978-82, and the 51 derivative ALRVs which date from 1987-90.

With a length of 30 m, the Flexity Outlook cars will have almost double the capacity of the CLRVs, and will also have air-conditioning. The 100% low floor cars will be customised for Toronto, and assembled at Bombardier’s Thunder Bay plant, where most of the CLRVs and ALRVs were built. The deal specifies there must be at least 25% Canadian content but TTC plans to negotiate with Bombardier to increase this proportion. The delivery schedule calls for prototype testing to begin in 2011 and revenue service by 2012.

The initial order is valued at C$1·3bn including spare parts and other costs. The contract will include options for up to 364 additional vehicles to operate Toronto’s planned Transit City light rail network, and if all options are exercised, the total value could exceed C$3bn. Substantial contributions towards the funding from the federal and provincial governments have not yet been guaranteed, but TTC officials are confident the money will come through before Bombardier’s offer expires on June 27.

Bombardier has been selected in preference to Siemens Canada which offered the Combino Plus model, now rebranded Avenio. The Siemens bid was said to be about 54% higher than Bombardier’s, and the company does not have a rail vehicle factory is Canada, which was seen as a disadvantage. Alstom had earlier indicated it would participate in the procurement process, but subsequently dropped out.

The Thunder Bay plant is currently assembling 39 six-car 'Toronto Rocket' trainsets for TTC's Yonge - University - Spadina metro line under a C$548m contract awarded in December 2006. Delivery of these cars is due to begin this year for completion in 2011.

Toronto plans to replace all of its 248-strong CLRV fleet