Tours Line A gets underway 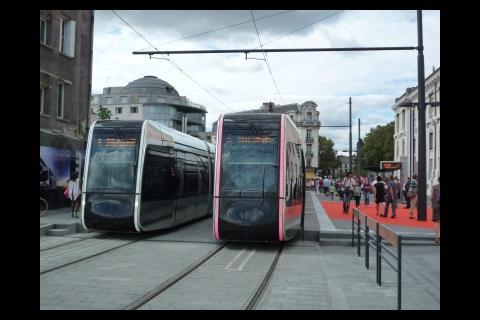 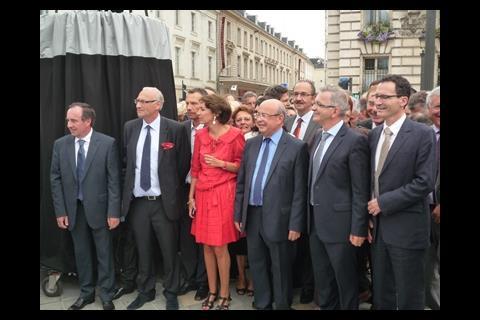 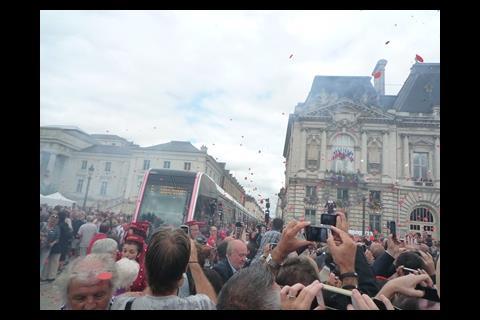 FRANCE: Celebrations were held in Tours on August 31 to mark the inauguration of the country’s 25th modern tram network. The city’s Mayor Jean Germain was joined for the inauguration by Minister of the Interior Manuel Valls and Heath & Social Affairs Minister Marisol Touraine, as well as representatives from Centre region and the 24 local authorities that make up the Tours metropolitan area.

Following the formal opening ceremony outside the Hotel de Ville in Place Jean Jaurès, free rides were offered for the rest of the weekend, whilst the celebrations continued with public entertainments and events at many of the stops. Full revenue service began on September 2.

The 15 km north-south light rail Line A links Vaucanson in the northeast with Lycée Jean Monnet in the southwestern suburb of Joué-lès-Tours, serving 29 stops. A 1·8 km section through the city centre is fitted with Alstom’s APS ground-level power supply to avoid the need for overhead wires in the pedestrianised shopping mall along Rue Nationale. Alstom has also supplied the signalling and a fleet of 21 Citadis 402 low-floor trams, which are 43 m long with capacity for 76 seated and 204 standing passengers.

Completed at a cost of €433m in current prices, the line has been developed for local transport authority SITCAT by the CitéTram consultancy, combining Transdev subsidiary Transamo with local firm SET. Project management was provided by Systra in a joint venture with infrastructure engineering firms Safege et Eccta and architects Richez Associates and Ivars & Ballet. Civil engineering was undertaken by Colas, Eiffage and Eurovia, with TPPL and TSO responsible for the trackwork and Colas Rail for the overhead line and power supply.

Design and styling were the responsibility of locally-based RCP Design, working in conjunction with French conceptual artist Daniel Buren. With more than 2 000 new trees, 6·7 km of grassed alignment and 19·3 km of cycle paths, the tram project has provided the opportunity to transform much of the city, creating what its promoters describe as ‘a fourth urban landscape’ alongside its buildings, the Loire cultural heritage and the Touraine gardens.

Line A is run by Keolis Tours, which has operated the local Filbleu bus network under contract to SITCAT since 2009; its current 6½ year contract runs to December 2018 and includes performance targets that envisage a 30% increase in public transport ridership following the opening of the tramway. Line A is expected to carry around 55 000 passengers a day, with a peak headway of 6 min and an end-to-end journey time of 47 min giving a commercial speed of 19 km/h.

The group’s consultancy arm Keolis Conseil et Projets advised SITCAT on the operations and maintenance requirements to be incorporated during the construction phase, as well as helping the operating business with staff training; around 135 of the company’s 400 drivers are now able to work flexibly, driving both trams and buses. Keolis Tours is also responsible for running the depot and control centre at Vaucanson, SITCAT having declined an offer from Alstom that the manufacturer should maintain the rolling stock.