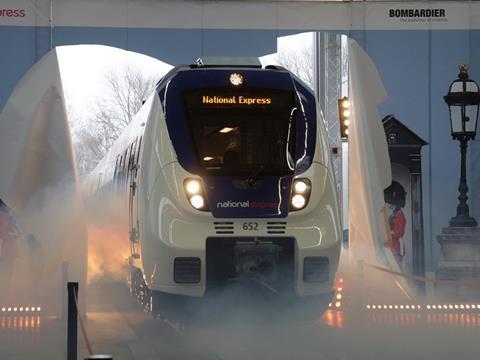 GERMANY: The first Talent 2 electric multiple-unit for National Express was ceremonially rolled out at Bombardier Transportation's Hennigsdorf plant on November 28, watched by guests including the UK Ambassador to Germany Sir Simon McDonald.

The 160 km/h units are to be deployed on two routes which a consortium of the UK transport group and local partner IntEgro Verkehr are to operate from December 2015 under a 15-year contract awarded in February 2013 by the Rhein-Ruhr, Westfalen-Lippe and Rheinland transport authorities. The routes are:

The services are currently operated by DB Regio and carry around 18 million passengers/year. When it won the contract, National Express said it expected the services to generate revenue of around €1·6bn over the 15-year period.

National Express announced a €170m order for 35 Talent 2 EMUs in June 2013, procuring the units on behalf of the transport authorities under a sale and leaseback deal. Bombardier is supplying a mix of three and five-car sets, with first and second class seating, CCTV, multi-purpose areas for prams, wheelchairs and bicycles, and passenger information displays showing connecting services. Each unit will have an accessible toilet, and the five-car units will have an additional standard toilet.