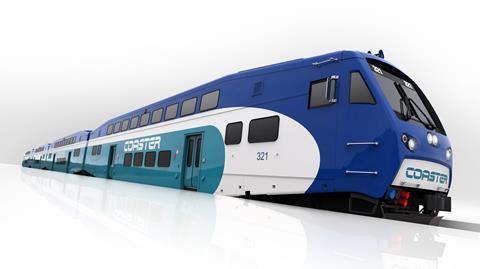 USA: San Diego’s North County Transit District has awarded Bombardier Transportation a $43m contract to supply a further 11 BiLevel double-deck coaches for entry into service in winter 2022-23. This will enable the Coaster commuter service to be increased to run every 30 min, and facilitate the future replacement of existing vehicles.

‘With these two additional trainsets in the fleet, commuters will have a number of train runs throughout the day to meet their needs; and that really makes the decision to try transit an easy one’, said NCTD Board Chair Tony Kranz.

The order was approved by the NCTD board in April and signed on July 7, after the California Transportation Commission confirmed funding in June.

It covers eight coaches and two driving cars to support San Diego Association of Governments’ 2050 Revenue Constrained Regional Plan for increased service levels, as well as an additional driving car. They will be built at Bombardier’s Thunder Bay site in Canada, and the contract includes an option for up to 27 more vehicles.