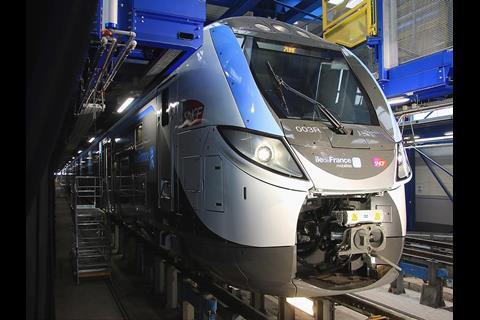 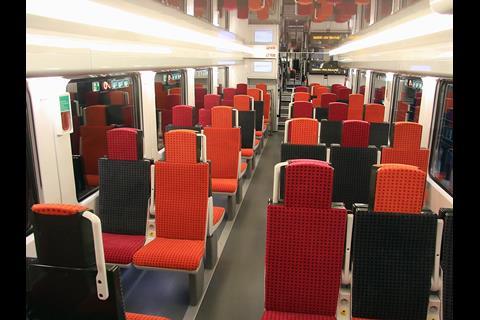 Being assembled by Bombardier at Crespin, the Regio 2Ns are due to start operating in Ile-de-France on December 8, having already been put into service in seven other regions. The first five trains will initially operate between Melun and Montereau. The initial tranche of 42 units, ordered at a cost of €589m, is due to be fully deployed on Line R by the end of 2018, eliminating the last Z5300 ‘Inox’ EMUs.

A follow-on order for 83 additional sets announced by Pécresse earlier this year will see at least 125 trains delivered by the end of 2021, with the subsequent sets being deployed on Lines N and D.

The Ile-de-France trainsets are fitted with 2+3 seating for high-density suburban operation. Each eight-car unit is formed of five double-deck vehicles and three single-deck intermediate cars with large pairs of doors for rapid boarding and alighting, connected by wide gangways for easy access along the train. A 330 m long formation of three sets will be able to carry a total of 3 120 passengers, including 1 746 seated. The units are fitted with at-seat power sockets, SIVE video information screens and CCTV.

The Regio 2N sets are the first to carry a new Ile-de-France Mobilités livery, which will gradually be rolled out across all Paris transport, including suburban and metro trains, trams and buses.