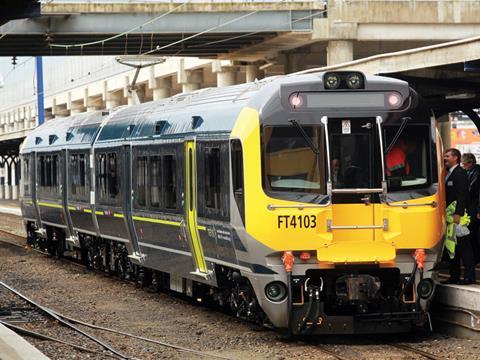 NEW ZEALAND: Greater Wellington and Horizons regional councils have been awarded funding from the NZ Transport Agency to develop the final business case for a fleet of hybrid multiple-units to replace ageing loco-hauled stock used on two regional commuter routes.

Citing the regions’ growing population, the councils last year announced plans for an NZ$415m modernisation of the Wairarapa Connection service linking Wellington with Featherston and Masterton, and the Capital Connection from Palmerston North.

Run by Wellington suburban operator Metlink using diesel locomotives leased from KiwiRail, the Wairarapa Connection has seen a 24% increase in ridership in the past decade; the service currently runs five times a day with a journey time of 1 h 45 min. Palmerston North lies in the neighbouring Horizons region, and the daily Capital Connection is operated by KiwiRail, offering a 2 h trip into Wellington in the morning and returning in the evening.

On January 24 the government awarded NZ$211m for track improvements in the region as part of a NZ$1·35bn infrastructure investment package. GWRC Chair Daran Ponter said this was ‘a solid green light for getting regional passenger rail moving’, as it ‘funds most of the track improvements put to government in the recent business case. The next step is to sit down with government and secure urgent funding for new hybrid trains to stop passengers being packed like sardines within the next five years.’

The intention is buy a fleet of at least 15 four-car multiple-units for the Wairarapa Connection, and two more trains to allow a doubling of the service to Palmerston North. The dual-mode trains would use the existing 1·5 kV DC suburban electrification as far as Upper Hutt or Waikanae, switching to ‘alternative energy sources’ for the remaining non-electrified sections.

The councils have been awarded NZ$5m to fund completion of the detailed business case, including a market study and risk assessment. The new fleet is provisionally priced at around NZ$300m, with entry into service envisaged around 2025.