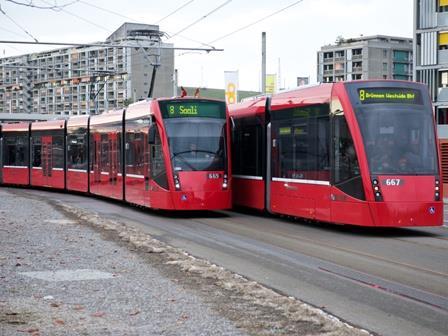 Two new tram routes have been introduced. The Bümpliz branch forms part of Line 7, with its eastern terminus in Ostring, while the Brünnen route operates as Line 8 which runs from the Westside shopping centre via Bethlehem and the main railway station to Saali. The two branches meet at Unterführung and share a 2 km section of new track as far as Kaufmännischer Verband, where they join the existing network serving central and eastern Bern.

In November 2007 Bernmobil awarded Siemens a €65m order to supply 21 Combino Classic 100% low-floor trams for use on Line 9 to Wabern and Tram Bern West. The air-conditioned cars are 42 m long and 2 300 mm wide.