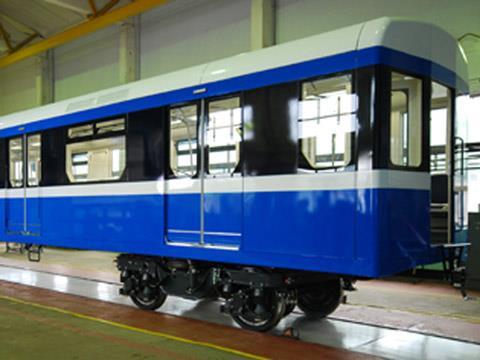 The NeVa series is the result of a collaboration agreement signed with Skoda Transportation on November 4 2007. It includes three vehicle types: a motor car with driver’s cab; a non-driving motor car; and a trailer car.

The first six-car train should be ready to start trials by the end of this year. Vagonmash has decided to build a manufacturing facility to produce the NeVa cars, with series production expected to begin by mid-2011.

The vehicles are designed to maximise energy efficiency, improve safety and offer a more comfortable travelling environment for passengers and staff. Innovations include aluminium sandwich carbody panels, which have helped to reduce the weight of a six-car train by 37 tonnes, and a Skoda traction package with regenerative braking to reduce power consumption by 30% compared to earlier designs. The cars are fitted with digital passenger information systems and video surveillance.