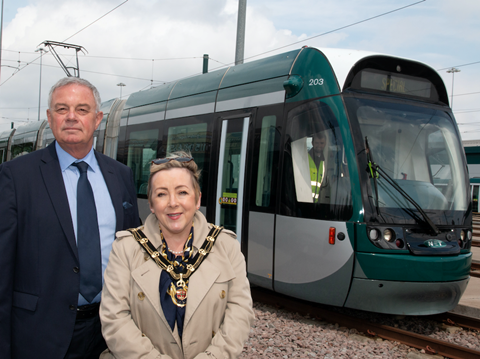 UK: Sheriff of Nottingham Catharine Arnold has unveiled the first of Nottingham Express Transit’s 15 Bombardier Incentro trams to be refurbished in a £3·5m project.

The work is being undertaken by Alstom at NET’s depot, minimising disruption by avoiding the need to move the vehicles elsewhere.

The scope includes a mechanical overhaul, and a refresh to give the original trams dating from the opening of the first phase of NET in a 2004 a similar appearance to the newer Alstom Citadis vehicles which entered service when the network was expanded in 2015.

‘The refurbishment will have significant benefits for customers and has been carefully considered to take into account the needs of people with disabilities, including those with sight impairments’, said NET Director & General Manager Paul Robinson. ‘Research has shown that having a single look across the fleet can help them access the network and also make it easier to use for people who may have dementia.’

The refurbishment is expected be completed by the end of the year.