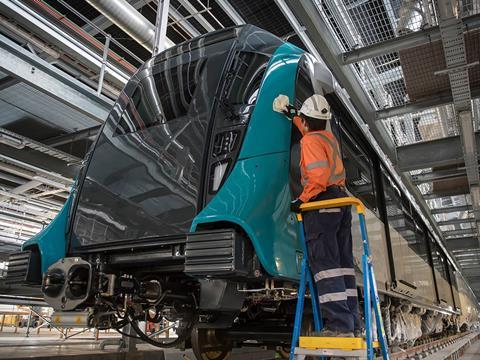 AUSTRALIA: Sydney Metro announced the delivery of its first trainset to the Rouse Hill depot on September 26.

Each of the walk-through trainsets will have three double doors per car side, two multi-purpose areas per for prams, luggage and bicycles and two wheelchairs spaces per car. The air-conditioned trainsets will have LED lighting, 38 CCTV cameras, emergency intercoms, two passenger information displays per vestibule, six real-time electronic route maps per car and train front destination displays,.

The A$8·3bn Northwest first phase of the metro will run for 23 km from Chatswood to Epping over a converted heavy rail line, then continue through a new 15·5 km twin-bore tunnel to emerge onto an 4 km elevated alignment, terminating at Cudgegong Road in Rouse Hill. Opening is planned for the first half of 2019.

The City & Southwest phase from Chatswood to Bankstown via the CBD is expected to follow in 2024. The New South Wales government has recently awarded John Holland and Laing O’Rourke Australia Construction a A$240m contract to rebuild Sydenham station as part of this phase, while the John Holland/CPB/Ghella joint venture has ordered five Herrenknecht TBMs. Four are double-shield hard rock gripper-type TBMs designed to excavate through sandstone and shale on the 6·2 km from Chatswood to Sydney Harbour and the 8·1 km from Marrickville to Barangaroo, while a specialised mixed-shield TBM will use slurry to tunnel under Sydney Harbour.