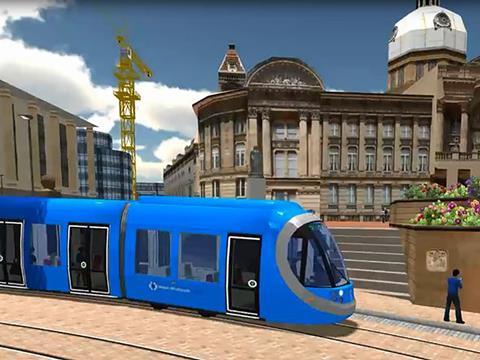 The 840 m extension is currently under construction for opening towards the end of 2019.

The video clips are taken from a computer simulation used to train tram drivers. They have been published to demonstrate how the tram will merge with traffic at the remodelled Paradise Circus/Queensway/Paradise Street junction, and to highlight the lack of overhead wires on the extension, where the CAF Urbos trams will use battery power.

A further 1·35 km extension will take the trams to Hagley Road in Edgbaston in 2021.

An extension at the other end of the line in Wolverhampton is also under construction, and routes between Wednesbury and Brierley Hill and between Birmingham city centre and Solihull are planned.

‘These are exciting times for Birmingham city centre and the Westside tram extension will deliver passengers to the heart of the many new office developments at Paradise and Arena Central as well as the city’s famous visitor destinations’, said Mayor of the West Midlands Andy Street.

The extensions are being built by the Midland Metro Alliance which brings together the West Midlands Combined Authority, which owns the light rail line, Colas Rail, with its ‘sub-alliance’ partners Colas Ltd, Barhale, Bouygues UK and Auctus Management Group, and a consortium of design consultancies Egis, Tony Gee and Pell Frischmann.