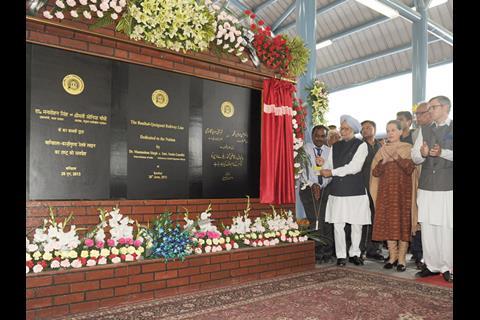 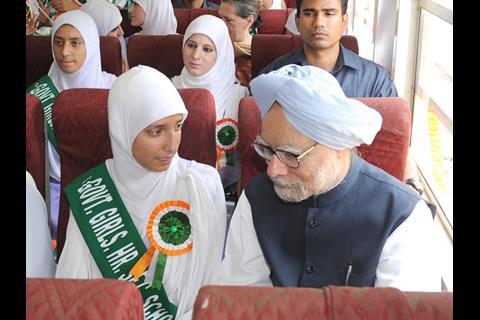 INDIA: Prime Minister Manmohan Singh flagged off Northern Railway's ceremonial first train on the next section of the rail link to Kashmir on June 26, travelling from Banihal to Qazigund with guests including local school pupils. Regular services began the following day.

The latest 17·7 km section was built at a cost of Rs16·9bn, including Rs13bn for the 11·2 km Pir Panjal tunnel, the longest on the Indian Railways network. This connects the Jammu region to the 119 km Kashmir Valley line between Qazigund, Srinagar and Baramula, which was completed ahead of the more difficult mountain section and opened as an isolated route in stages during 2008-09.

The Pir Panjal tunnel offers a year-round all-weather alternative to the 35 km road, which is impassable in heavy snow. Built by Ircon International, Hindustan Construction Corp and GeoConsultants, it has five groups of five roof-mounted ventilation fans, and safety systems including CCTV cameras every 62·5 m, fire detection and hydrants every 125 m, emergency telephones every 250 m, alarms every 250 m, air quality monitoring every 500 m, escape route signs every 50 m, emergency lighting and a public address system. There is a 3·0 m wide road for rescue and maintenance, along with a 772 m escape tunnel.

A 25 km extension from the IR railhead Udhampur to Katra is scheduled to open in August, built at a cost of Rs10·3bn. The final 111 km connecting this to the isolated Kashmir line is now expected to be commissioned in 2017, including a 12 km tunnel and a 1 315 m long and 359 m high bridge over the River Chenab.