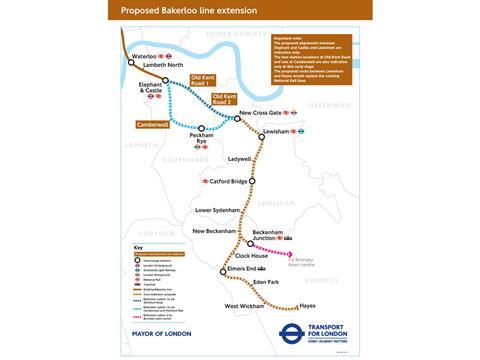 UK: Transport for London launched a consultation exercise on September 30 to ‘understand the level of public support for a proposed extension’ of London Underground’s Bakerloo Line from Elephant & Castle southeast towards New Cross, Lewisham, Bromley and Hayes.

The extension is intended to improve connections to areas which are currently less well served by public transport, release capacity on the national rail network, support economic growth, and meet demand from the predicted increase in London’s population.

TfL has identified two options for a tunnelled route from Elephant & Castle to Lewisham; 1a runs via the Old Kent Road with two stations to support regeneration plans, while 1b would run via Camberwell and Peckham Rye. The locations of the proposed stations have still to be decided.

The line could terminate at Lewisham, or be continued by taking over the existing Network Rail line to Hayes, with a spur to Beckenham Junction where the LU station would be in addition to the railway station. Hayes services would be increased from six to up to 15 trains/h, with current train paths from Hayes through London Bridge station allocated to other rail services. There is also an option to extend the line eastwards in tunnel from Beckenham Junction to Bromley town centre.

The cost of extending the Bakerloo Line to Hayes is estimated at £2bn to £3bn. TfL would work with councils along the route to explore funding options, which are likely to include contributions from residential and commercial developments along the route.

The consultation runs to December 7. A report is to be presented to the Mayor of London in spring 2015, before more detailed consultation is undertaken. TfL said a southern extension of the Bakerloo Line has been under consideration from the time it opened in 1906 (RG 3.06 p284A).