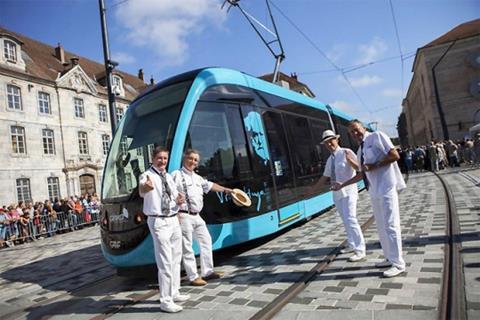 The tramway has been explicitly developed as a low-cost project by the Grand Besançon municipality, which had hoped to reduce construction costs by up to a third compared to recent light rail schemes in other French cities. It serves 31 stops from Marnières in the east of the city to Hauts-du-Chazal in the southwest with a short branch to Besançon-Viotte main line station.

A consortium of STD, Sacer, Roger Martin, Colas Rail and Alstom undertook civil works on the 7 km western section under a €43m contract awarded in March 2012. The eastern 7 km section was built under a €53m contract by the Eurovia consortium, which includes Bonnefoy, Eurovia Travaux Ferroviairies, Campenon Bernard and Coteb Codiel.

A detailed account of the Besançon light rail project appeared in the April 2011 issue of Railway Gazette International, available to subscribers in our digital archive.