SWEDEN: Infrastructure manager Banverket has awarded a consortium of Bombardier and Balfour Beatty Rail a further contract for the rollout of ERTMS.

The contract announced on May 29 covers a pilot installation of Bombardier's Interflo 450 ERTMS Level 2 trackside equipment on the Ådalsbanan line, and is expected to be worth SKr189m in the first year. It is a development of the system which Bombardier is installing on the 190 km Botniabanan between Nyland and Umeå.

The order follows from an eight-year framework agreement announced jointly by Banverket and its Norwegian counterpart Jernbaneverket in April. 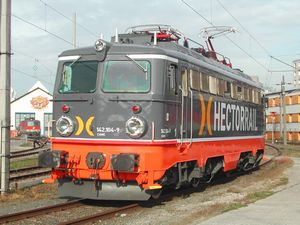 Hector Rail has bought a ninth Class 1142 electric locomotive from Austrian Federal Railways. It will be leased to infrastructure manager Banverket for testing ETCS Level 2 on the 190 km Botniabanan, without first being equipped with Swedish signalling equipment.