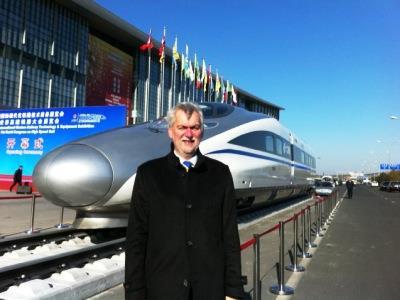 CHINA: More than 25 000 visitors are expected to stream through the exhibition halls at the China National Convention Centre in Beijing during the Modern Railways 2010 trade fair which was officially opened by Vice Minister of Railways Wang Zhiguo on December 6.

The 10th Modern Railways exhibition to be held since 1992 has attracted more than 300 companies, including many of the large international suppliers, their local trading partners and Chinese firms specialising particularly in infrastructure components, track, signalling, electrification systems and rolling stock. International specialists taking part include specialists in workshop equipment, railway construction and measuring technology and rolling stock component manufacturers.

Pride of place goes to the driving car of a CSR-Sifang built CRH380A high speed trainset, which stands prominently outside the exhibition centre. The Ministry of Railways’ stand describing the development of the Chinese high speed network occupies almost a quarter of the halls, with models of several huge bridges needed to carry the new lines across the Yangtze and Yellow rivers, as well as the advanced construction methods developed to build new lines very rapidly. There are also large-scale models of several CRH trainset types and a full-sized mock-up of a modern signalling control centre.

With around 2 500 delegates, including 800 from outside China, attending the 7th UIC Highspeed congress in the adjacent conference suite, Wang said the the exhibition would provide ‘an important platform to demonstrate the technical innovations of China’s high speed rail and promote the exchange of high speed rail technology from different countries.’