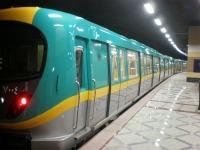 The 7·7 km eastern extension links Abbasiya and Al Ahram in Heliopolis, with three intermediate stations. Construction started in 2009 and was completed five months ahead of schedule at a cost of E£4·3bn. One earth-pressure balance tunnel boring machine and one slurry TBM were used.

Seven air-conditioned trains, assembled locally, have been added to the fleet. The 12 km Line 3 is now expected to carry 700 000 passengers/day.

The third phase is to be an 18 km western extension with two branches and 15 stations. This is being partly financed with €940m in loans from Agence Française de Développement and the European Investment Bank. The final phase would bring the line to Cairo International Airport in the northeast of the city, taking the total length to 43·5 km.